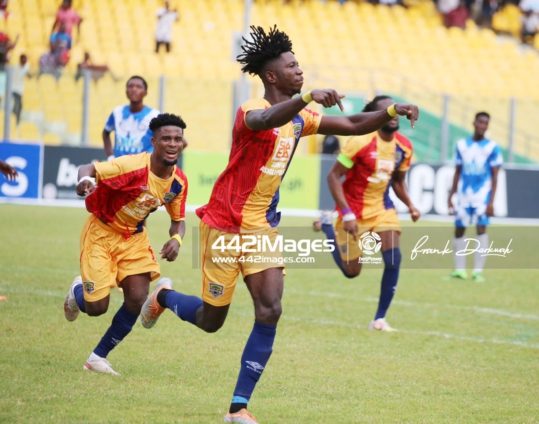 New signing, Konadu Yiadom, scored late to rescue a point for Hearts of Oak against Great Olympics at the Accra Sports Stadium on Sunday, September 18, in match day two of the 2022/23 betPawa Premier League.

Olympics were first to strike in the game as Abdul Razak Yussif capitalised on a defensive error between Yiadom and Eric Ofori Antwi to give the Wonder Club the lead.

Hearts, having conceded the opening goal, saw much of the ball thereafter but decision-making in their final third meant they were far from equalizing as they headed into the break with a deficit.

Head coach Samuel Boadu introduced Junior Kaaba after recess and the forward was one of the game changers for the Rainbow Club as they continued their chase.

Samuel Ashie Quaye should have scored the second goal for Olympics around the 70th-minute mark after being put through on goal and facing Ofori Antwi.

However, the versatile player failed to take advantage of the opportunity presented to him.

In the 88th minute of the game, Enock Asubonteng effected a Hearts’ corner which was headed into the net by Yiadom who was making his league debut for the club to level proceedings.

Despite the late pressure, Hearts could only take a point away from the game as Olympics moved to four points after two games.

DISCLAIMER: The Views, Comments, Opinions, Contributions and Statements made by Readers and Contributors on this platform do not necessarily represent the views or policy of Multimedia Group Limited.
Tags:
Hearts of Oak
Olympics