2022 budget: Government concentrates more on secondary education to the detriment of the basic level - Lecturer - MyJoyOnline.com

2022 budget: Government concentrates more on secondary education to the detriment of the basic level – Lecturer 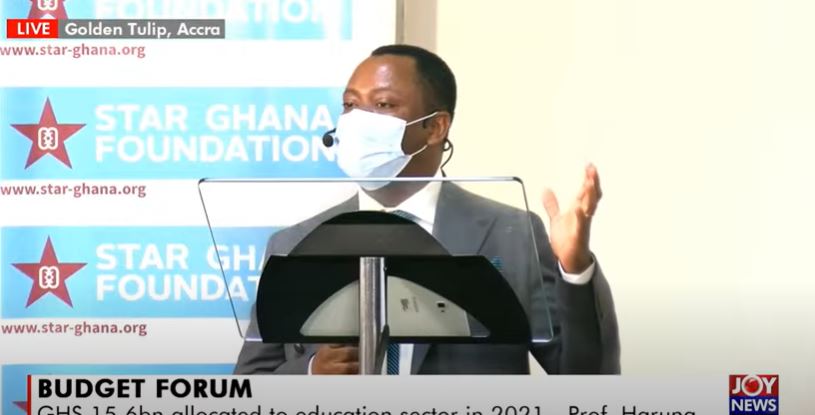 A Senior Lecturer at the University of Development Studies, Dr. Haruna Issahaku has said that the 2022 budget statement disadvantageously targets the Akufo-Addo-led administration’s Free SHS flagship programme at the expense of basic education in the country.

According to him, the government has shifted attention from basic education development and that is responsible for the lack of textbooks for the new curriculum introduced two years ago.

He noted that, once again, the issue of textbooks has not been given special mention in the 2022 Budget proving his assertion of the government’s shifted attention from basic education.

Speaking at the Star Ghana Foundation Budget Forum on Education and Health, Dr. Haruna Issahaku noted that the neglect of basic education is just one of the many issues the country’s education sector is grappling with.

He added that Ghana has failed to meet UNESCO’s minimum threshold for the allocation of public expenditure to education in order to improve the quality of education in the country.

Dr. Issahaku said, “Member states of UNESCO agreed that they’ll spend between 4-6%of their GDP, or alternatively, 15 to 20% of public expenditure on education in order to improve education.

“Given this benchmark, we can now look at the allocations to the education sector between 2021 and then 2022 so that we can see whether Ghana is on course on meeting this threshold of 4% of GDP expenditure on education.

“Comparing that to the UNESCO threshold, we see that we’re not there yet. If you look at the allocation in terms of the percentage of government spending that goes to education in 2021, it is about 13.7% and this declined marginally to 12.9% in 2022.

“Which means that if we use that in the quota also, we’re not within the UNESCO threshold of spending at least 15% of public expenditure on education,” he said.

Summarising his report, he stated that Ghana is not investing as much as is expected into its education sector and this could affect the quality of human resources the country churns out.

“And it also implies that Ghana not being able to meet the UNESCO minimum threshold of spending 4% of GDP on education, would have implications on the quality of education access, education affordability among others. This will have an impact on the quality of the human resources that we produce as a nation,” he said.

Dr. Issahaku called on the government to remedy the situation by paying particular attention to basic education and meeting the UNESCO threshold for allocation to education.