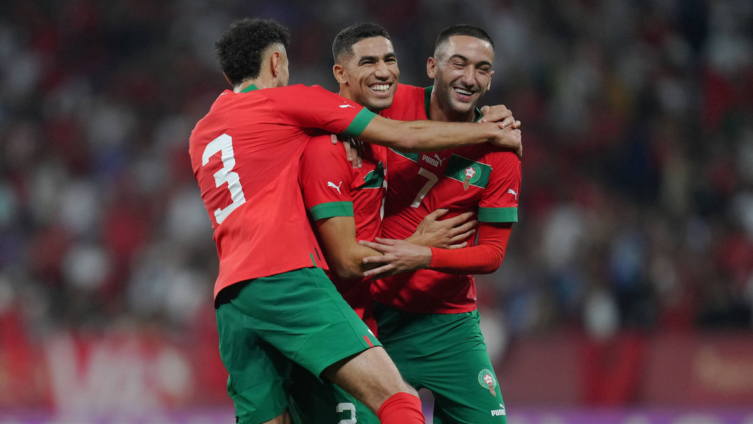 The Atlas Lions of Morocco produced a masterclass performance to beat Spain 3-0 on penalties to book first quarterfinal slot in the FIFA World Cup.

After a thrilling 120 minutes of action, Morocco, the only African country left in the 2022 FIFA World Cup showed resilience, class and positive attitude to continue their unbeaten streak when they humbled the 2010 champions in a penalty shootout at the Education City Stadium in Doha, Qatar on Tuesday night.

The early minutes of the game saw the Atlas lions defending their lines, hoping not to concede from the Spanish, who were solid upfront with the pairing of Marco Asensio and Ferran Torres.

Moroccan winger, Sofiane Boufal kept the attack of the African giants busy giving his marker, Marcos Llorente a tough time to give his side the lead in the first half of the game.

The men in blue and white, Spain were halted infront of the 18-yard box of the Moroccans who were left with no choice than to try their long shots beyond the box, but their efforts were not enough to get them ahead of their opponents.

The tactical formation by the Moroccan Coach, Walid Regragui, saw all ten players run back to cover their lines anytime they gave the ball away.

After a solid first half with few chances created, the game was still barren as Morocco kept the hopes of Africa high.

After recess, Luis Henrique introduced Nico Williams and Alvaro Morata who were difficult for their opponents to handle at the right side, making sure all crosses went into the opponent’s 18-yard box, but the Moroccans defence was calm to take charge of the game.

The connection between Achraf Hakimi and Hakim Ziyech was one to easily break the defence of Spain, as they looked dangerous anytime they approached the defense of the European team.

Spain on the other hand kept on sharing passes, recording a total of 800 passes as they hoped to penetrate the defense of the Moroccans who had built a block infront of their goalkeeper who was very well composed in between the sticks.

After all efforts to get the long balls into the space of the Africans, Spain were unfruitful as the first 90 minutes of the game ended goalless.

The extra time was a moment for Morocco to take the lead in the game as Walid Cheddira bottled two crucial chances which could have seen the Atlas Lions ahead by two goals.

The frustration on the fans of the Moroccan fans was one to keep their players going to give their all for their nation.

Coach Walid Regragui kept on motivating his boys to get into the game as his opponents were approaching.

Spains Pablo Sarabia, was denied by the crossbar in the dying minutes as the game ended barren after 120 minutes of play.

Moroccan goalkeeper, Bono was the hero of the day as he saved all three penalties to send his side to the quarterfinals of the 2022 FIFA World Cup in Qatar.

Morroco would now join Cameroon, Senegal and Ghana as the only African sides to have made it to the quarterfinals in the history of the FIFA World Cup.

Regragui’s charges would face either Portugal or Switzerland in the quarterfinals hoping to make it to the semi finals as the only African country to have achieved that height.

DISCLAIMER: The Views, Comments, Opinions, Contributions and Statements made by Readers and Contributors on this platform do not necessarily represent the views or policy of Multimedia Group Limited.
Tags:
FIFA World Cup 2022
Morocco
Qatar 2022 World Cup
Spain