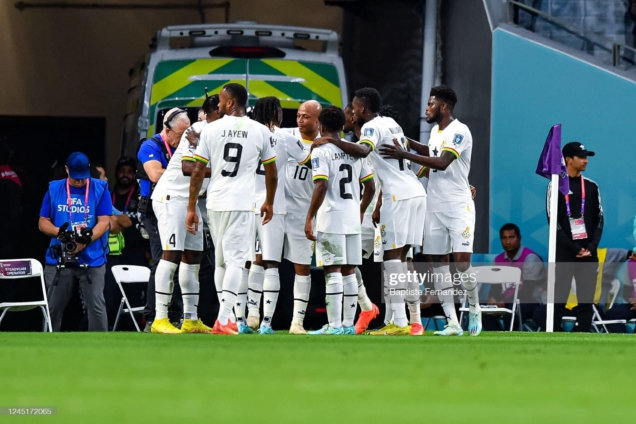 Skipper of the Black Stars, Andre Ayew says the team is focused and determined to qualify to the knockout stages of the 2022 World Cup ahead of Uruguay and Korea in Group H.

Ghana defeated South Korea 3-2 yesterday at the Education City Stadium to bolster their chances of qualifying for the next stage of the FIFA World Cup in Qatar.

The Black Stars would come face-to-face again with Uruguay in the final group game on Friday at the Al Janoub Stadium.

Ghana would need at least a goalless draw to progress, whilst Uruguay would need three unanswered goals and hope Portugal beat Korea in the last round of matches.

The Friday clash would be the second meeting between the two countries at the World Cup.

It would be recalled that in the 2010 World Cup in South Africa, Uruguay denied Ghana a place in the semi-final courtesy of a Luis Suarez handball.

Many Ghanaian football fans are calling for revenge against the Sky Blue.

However, speaking in an interview with the GNA Sports, Ayew said the Black Stars were focused on defeating the two-time world champions, and not concerned about a revenge.

He said: “I’m the only one who was in the squad when that happened, so the others don’t know how we felt but everyone felt bad. For me, I just want to get into the next stage so if it was revenge or not, we would go with the same determination and the same desire to win because we want to get to the next stage.

Andre Ayew added that: “Where I am now, I’m not looking back but I’m just looking at what’s coming on Friday, I don’t want to talk about the past, I just want to focus on what’s coming and how to win.”

DISCLAIMER: The Views, Comments, Opinions, Contributions and Statements made by Readers and Contributors on this platform do not necessarily represent the views or policy of Multimedia Group Limited.
Tags:
2022 FIFA World Cup
Andre Ayew
Qatar 2022 World Cup