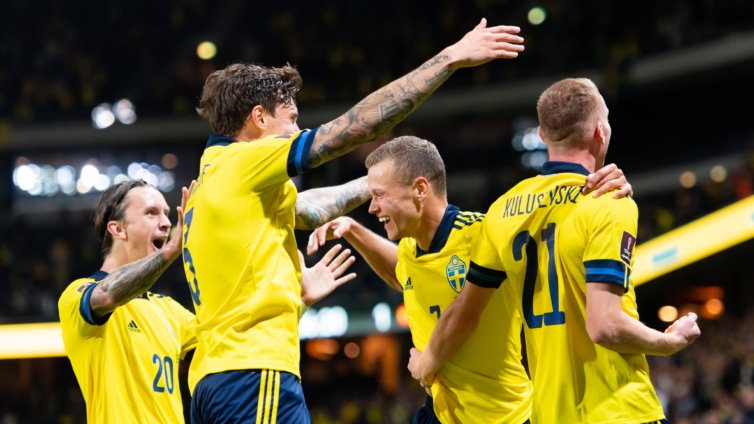 Spain suffered their first World Cup qualifying defeat since 1993 as Sweden came from behind to end La Roja’s 66-game run.

Carlos Soler volleyed Luis Enrique’s Spain into an early lead in Stockholm on his international debut.

Viktor Claesson controlled Dejan Kulusevski’s pass before firing in a famous winner from 12 yards out.

The previous team to beat Spain in a World Cup qualifier were Sweden’s neighbours, Denmark, in March 1993 in Copenhagen.

Since then Spain had won 52 World Cup qualifiers and drawn the other 14.

The win takes Sweden top of Group B on nine points from three games.

Spain have seven points from four games and could be facing a play-off for a place at the 2022 World Cup with only the group winners qualifying automatically.

Romelu Lukaku moved up to 66 goals for Belgium with a double as they came from behind to beat Estonia.

Estonia captain Mattias Kait scored a shock opener in Tallinn but Hans Vanaken headed Belgium, who are ranked number one in the world, level.

Chelsea striker Lukaku showed good strength to fire Belgium into the lead and then made it 3-1 on his 99th cap.

Belgium top Group E on 10 points from four games. The Czech Republic are second on seven points after beating Belarus 1-0.

Wales, who did not play a game, are on three points from only two games.

Germany eventually wore down Liechtenstein resistance as they beat the minnows 2-0 in Hansi Flick’s first game in charge.

Chelsea’s Timo Werner slotted the ball between Benji Buchel’s legs from Jamal Musiala’s pass to give the Germans a 41st-minute lead.

Leroy Sane sealed the win with a fine solo goal in the second half.

Germany had a total of 29 shots in St Gallen, Switzerland, including Robin Gosens heading off the crossbar.

They still sit one point behind Group J leaders Armenia, who drew 0-0 with North Macedonia.

DISCLAIMER: The Views, Comments, Opinions, Contributions and Statements made by Readers and Contributors on this platform do not necessarily represent the views or policy of Multimedia Group Limited.
Tags:
2022 World Cup Qualifiers
Belgium
Germany
Spain
Sweden