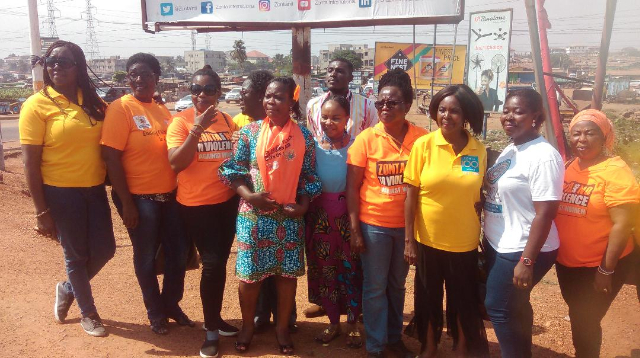 President of Zonta Club International, Tema Chapter, Naana Aboagye Asare, has revealed that 21% of young girls in the country are in child marriage.

During the unveiling of a United Nations Population Fund (UNFPA) billboard at the Ashaiman overpass, Miss Asare  suggested that drastic measures needs to be taken by stakeholders to fight against this menace that was destroying the potentials of the girl child.

“Statistics on child marriage in Ghana was alarming and needed to be nip in the bud,” she said.

UNFPA Ghana Gender Programmes Analyst, Selina Owusu, who led in the unveiling of the billboard, said child marriage was a serious national issue that needs to be addressed immediately.

She called on all stakeholders and Ghanaians to join in the fight against child marriage and gender-based violence in the country.

Mrs Owusu further noted the unveiling of the billboard was part of the commemoration of the 16-Day activism adopted by the Fund in the fight against child marriage and gender-based abuse.

“We are creating the awareness that violence in every form or shape has to be stopped. Violence affects our development that is why UNFPA and ZONTA are unveiling this billboard,” she said.

The 16-Day activism which will run from November 25, 2019 to December 10, 2019, seeks to establish a platform to create awareness of gender-based abuse and fight child marriage.

“We need action now as the talk is becoming too much; we need a timeline, let’s say a five-year timeline to eradicate this menace,” the UNFPA Ghana Gender Programmes Analyst emphasised.

Regional Director of the Domestic Violence Victims Support Unit (DOVVSU), Chief Inspector Sabina Ama Blay entreated individuals who are domestically abused to report to the institution and not keep it to themselves.

She commended the UNFPA for the 16-Day activism initiative and asked Ghanaians to support the fight against child marriage and gender-based violence.

The unveiling of the billboard was done by the UNFPA in partnership with Zonta International Ghana.