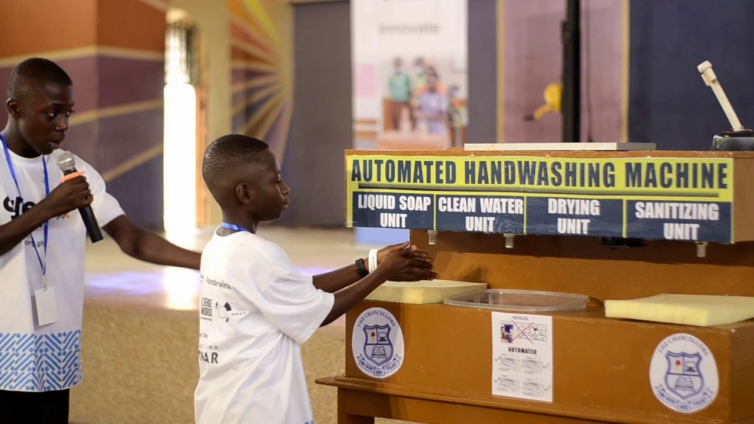 Fifty teams from the Ashanti and Greater Accra regions will battle it out at the final stage of the Ghana Science and Tech Explorer Prize (GSTEP) competition to clinch the ultimate title.

After the first pitch of their developed technologies, the participants are expected to make a final appearance with a display of their fully-developed prototype for pitching.

Twenty-five teams from various districts in the Ashanti region took turns before a panel of judges to pitch their ideas and innovative modules or prototypes.

From agricultural to environmental challenges, the teams of four to six proffered technology-based solutions to an identified challenge in their communities.

These accessories and shirts made from local fabrics but decorated with plantain fibres were only a teaser of the ingenuity of these basic school students.

An illuminated child road safety device developed by the all-female team nicknamed the Genius Six of Uaddara, threw the judges and audience into a frenzy.

The device is designed to assist basic school children crossing the busy streets in the cities.

“Our interest was unveiled based on a report made from the National Road Safety Commission which found that from January to September 402 school children were involved in road fatalities,” one of the girls indicated.

Other participants shared that their projects seek to provide eco-friendly solutions to some existing activities detrimental to the environment.

They are in efforts to mitigate the impacts of climate change.

“We are trying to extract fibre from plantain stems for cloth making and other fashion accessories. This is because we have noticed that non-biodegradable materials affect humans and aquatic life when they are being exposed to landfills and water bodies,” Vera Dzifa Gomashie, member of the Asuofia ‘D’ PlanWear, said.

“We are not utilizing the resources we have, the ideas and brains of our young ones. These kids are open to a lot of issues because they have the internet. It would baffle you the kind of things they know.

“So I think the best thing is for us to encourage them and give them the opportunity for them to know they are capable of bringing scientific solutions to a problem with the guidance of a mentor,” she said.

The groups participated in a seven-week mentorship session where they were equipped with marketing and pitching skills in developing their prototypes.

Sheila Akuoko, a mentor, was positive about a developed country built on technology.

“The mentoring session has been a good experience because I realized that from the initial stages, the confidence level of the students and the knowledge in Science, how they appreciate things were very low.

“But as we went on with the program and discovered something new, I realized that it has really added to their lives. Going forward, I think there is a future for science and engineering in Ghana,” she said.

The teams are expected to meet other participating groups in the Greater Accra region to make their final pitch where an overall winner will be selected.

DISCLAIMER: The Views, Comments, Opinions, Contributions and Statements made by Readers and Contributors on this platform do not necessarily represent the views or policy of Multimedia Group Limited.
Tags:
Ghana Science and Tech Explorer Prize (GSTEP)