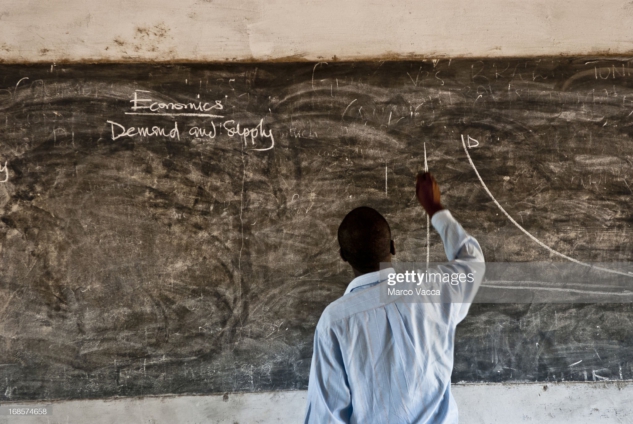 A teacher in a secondary school explain by means of graphics the fundamental of economics.

Some 256 teachers have sued the Ghana Education Service (GES) and the Attorney General over their mass failure in the December 2021 promotional examinations.

Mr James Enu, counsel for the applicants (teachers), told the Ghana News Agency that none of the 256 teachers, who wrote the exams at that centre passed, adding that, such an occurrence was bizarre.

Mr Enu said even though the applicants petitioned the GES to investigate the issue, they were informed that nothing untoward was found in the circumstances leading to their failure.

He said the applicants, however, believed that the GES did not conduct any investigations into the issue, therefore, he wrote on behalf of his clients to the Service to request for their scripts and scores, but no response was received to that effect.

He added that it was also worrying that the pass mark for the exams was not disclosed to the candidates before they sat for it but rather, they were informed after the examination that they had all failed the paper.

He said it was based on these that the applicants took legal action against the GES seeking the court to set aside the results of the exam and order GES to furnish the applicants with their exams scores and scripts, as well as put an injunction on the defendant to prevent them from organizing other exams until the determination of the case.

Mr Oheneba Akyea Mensah, representatives of the teachers, said the issue had affected them psychologically, emotionally, and physically making it difficult for them to properly discharge their duties as teachers.

Mr Mensah said during the exams some of the applicants did not have index numbers and were asked to use their staff numbers, adding that one was also absent while another got involved in an accident but all of them were declared as failed.

He said they wanted to set a precedence as this was not the first time such incidents have occurred.

Meanwhile, the Tema High Court ‘B’ presided over by Justice Emmanuel Ankamah, has set December 12, 2022, for the movement of the application.

DISCLAIMER: The Views, Comments, Opinions, Contributions and Statements made by Readers and Contributors on this platform do not necessarily represent the views or policy of Multimedia Group Limited.
Tags:
Attorney General
GES
Ghana Education Service