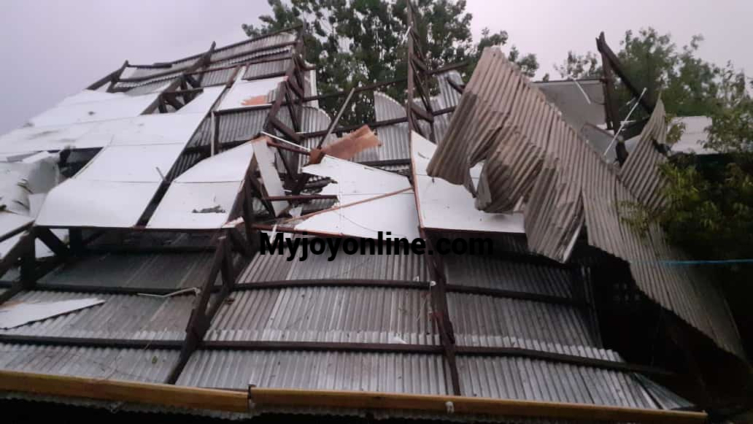 Three children have been injured with many others rendered homeless after a rainstorm hit Kalba in the Sawla-Tuna-Kalba District of the Savannah Region.

The injured, who are below ten (10) years of age, were rushed to the Kalba Health Centre and have been treated and discharged.

In the early hours of Saturday, March 19, 2022, the rainstorm ripped off the roofs of the Out Patient Department (OPD) of the Health Center, a basic school and several houses.

Some of the victims are currently putting up in a church structure while others have moved in with friends and relations.

Meanwhile, at the time JoyNews was leaving the community, officials of National Disaster Management Organisation (NADMO) were yet to arrive to take stock of the extent of damage in the disaster.

These victims who spoke to JoyNews said they are surviving on the benevolence of friends and family as they have virtually lost everything, including food stuff.

“We are living in someone’s house because all our things have been destroyed. We don’t know what to do now, so we are appealing to the government and the public to come to our aid,” Amadu Little, one of the affected residents said.

Christiana Bayong also called on NADMO and the government to come to the aid of affected persons.

“We want the National Disaster Management Organisation (NADMO) and other organisations to support us with food and clothes for our Children to continue to go to school while we rebuild,” she said.

At the Kalba health facility, officials said the extent of havoc caused by the rainstorm was severe, thus required urgent attention, “because many of the structures have been damaged beyond repairs.”

DISCLAIMER: The Views, Comments, Opinions, Contributions and Statements made by Readers and Contributors on this platform do not necessarily represent the views or policy of Multimedia Group Limited.
Tags:
NADMO
rainstorm
Savannah region