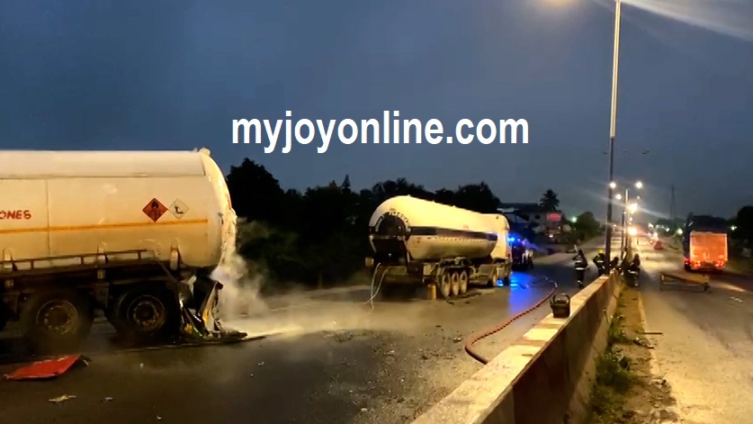 The leaking gas tanker at the scene

Three people have been confirmed dead after a commercial Zhontong bus crashed into a Renault gas tanker that was on its way to discharge gas at a nearby station at Fumesua near Ejisu on Kumasi-Accra road.

Two female victims died on the spot while the male among them died at the Ejisu Government Hospital where he was rushed for medical attention.

The accident occurred at a spot near Alhaji Saliya at about 11 P.M on Tuesday.

The timely intervention of personnel from the fire service and Police Motor, Traffic and Transport Department prevented the leaking gas tanker from catching fire.

The driver of the gas tanker with registration  GN 9384-20  which was in the inner lane is said to have signaled to oncoming traffic of his intention to negotiate a curve to nearby Sonique Gas to offload gas.

But the speeding Zhontong bus, traveling from Asante Mampong on the Kumasi-Accra road direction crashed into the rear of the gas tanker, causing damage to the truck.

Police sources say all 41 passengers on board the bus survived the accident, except three.

The injured were rushed to the Living Waters Hospital and the Ejisu Government Hospital.

All victims sent to the Living Waters Hospital at Krapa have been treated and discharged but some are on admission at the Ejisu Government Hospital.

Meanwhile, the bodies of the deceased have been deposited at the Juaben Government Hospital morgue.