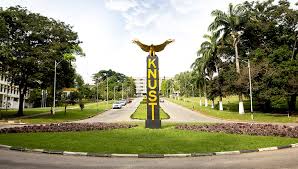 Three students of the Kwame Nkrumah University of Science and Technology (KNUST) have died after two separate accidents in the school on Saturday March 27, 2021.

Confirming the incident on JoyNews Prime, University Relations Officer of the KNUST, Dr. Daniel Norris Bekoe said the first incident occurred when a car with five students run into a tree around 3 am.

Two of the students died on the spot while one is in critical condition. The other two are in stable condition receiving treatment at the Komfo Anokye Teaching Hospital.

“We learnt a car with about five occupants who are all students, one is a student of the University of Ghana and four of them are students of KNUST. They crushed into a tree by the roadside around 3am. Two of them lost their lives, one is in critical condition at the Komfo Anokye Teaching Hospital and two other occupants are in stable condition and responding to treatment” Dr Bekoe said.

The cause of the accident is not readily known but the University Relations Officer said the police have began investigations into the incident.

In the other accident on campus, a student accidentally fell off at the Unity Hall.

The student was said to have gone to visit a friend when he collapsed, fell on the stairs of the first floor and hit the head against the wall. He was rushed to the hospital and gave up the ghost.

“Around 11am, we learnt of another incident where a Level 100 student went to the Unity Hall to visit a friend and while they were having a conversation, I think he passed out and fell on the staircase of the first floor and then hit the head against the wall. He was rushed to the Komfo Anokye Teaching Hospital. Doctors tried all they could but unfortunately we lost him” the URO told Gifty Andoh Appiah.

Dr. Norris Bekoe indicated that the families of the deceased have been informed of the tragic events. He said the University is saddened by the incidents and wished the bereaved families God’s guidance in this trying times.

Students of the KNUST have however expressed shock at the incident and pray the other students receiving treatment recover.

DISCLAIMER: The Views, Comments, Opinions, Contributions and Statements made by Readers and Contributors on this platform do not necessarily represent the views or policy of Multimedia Group Limited.
Tags:
Accident
Deaths
KNUST