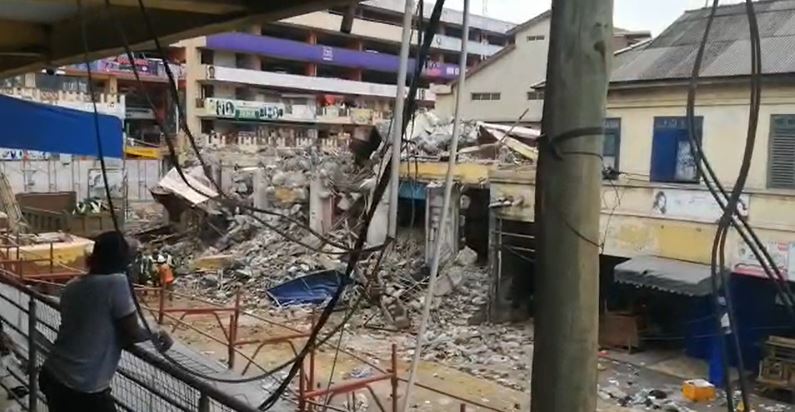 A joint Police and Military team has demolished major parts of the 3-storey ‘Hong Kong’ building near the Makola Market in Accra, which was burnt last month.

On Monday, August 23, the Military cordoned off the area to pull down the facility, which housed over 80 shops that were affected by the fire outbreak.

Some traders who were not directly affected by the fire are asking government to speed up with clearing the debris from the demolished structure.

They complained that they have not been able to sell their wares because the cordoned area is where they mount their tables to transact business.

The traders admit the pulling down of the structure is a great idea. They however, want officials to speed up the process.

“We couldn’t work today because of the demolition. We are single mothers and the only ones taking care of our families. So if we don’t work, it will be difficult for us to take care of our children,” one of the traders told JoyNews.

Another woman who sells earrings and ribbons argued that loans were procured to start the business. Hence, any delay in the work would make it difficult for them to repay the loans.

“We started our business with loans and so should there be a delay for us to resume our trading activities, the banks will harass and arrest us. So we are pleading with the A.M.A boss to task the Military officers to clear the debris,” she added.