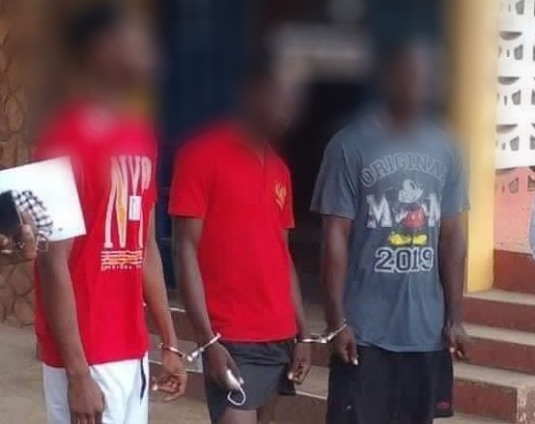 Three final year students of the Opoku Ware Senior High School have been arrested for their alleged involvement in a robbery incident in Kumasi.

Sources at the Ashanti Central Divisional Command say the three students, aged between 17 and 19 years, failed in their attempt to snatch a taxi cab from its driver on Friday night.

The driver picked the suspects from the Santasi suburb. The passengers sought his services under the pretext of travelling to the Lancaster Kumasi City, formerly Golden Tulip Hotel, in the Nhyiaeso suburb.

But upon reaching the Rattray Park area, the three impressed on the driver to hand over the ignition keys to them or risk being stabbed.

A struggle for the keys ensued between the suspects and the driver. Eventually, the vehicle hit a wall along the Ridge Police Station and the Royal Golf Park Junction.

This attracted onlookers from a nearby club who came to the aid of the taxi driver.

One of the students fled the scene, while two of them were arrested and handed over to the Police.

Investigations by the Kumasi Central Police command led to the arrest of the third suspect from his hideout.

Meanwhile, command officials and authorities at Opoku Ware School, have declined comments on the matter.