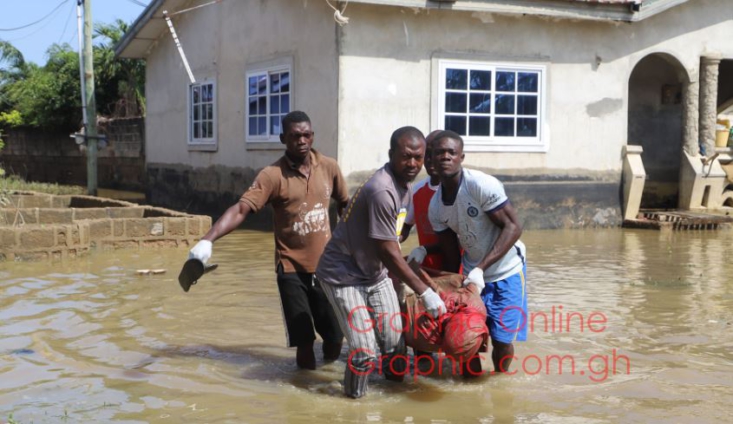 Four persons have been confirmed dead, with 10 others missing, as a result of torrential rainfall which flooded many areas in five municipalities and districts in the Eastern Region a couple of weeks ago.

The deaths occurred in the New Juaben South and New Juaben North municipalities and also in the Akyemansa and the Denkyembour districts, while those missing were from the Nsawam Adoagyiri municipality.

This was disclosed by the Eastern Regional Director of the National Disaster Management Organisation (NADMO), Kwame Appiah Kodua, yesterday.

Mr Kodua, who was updating the Daily Graphic on the situation, said it was unfortunate that the floods claimed human lives, with 10 others missing.

He indicated that NADMO was trying its possible best to locate the missing people.

Mr Kodua said his outfit was still assessing the situation, noting that so far 17 municipalities and districts in the region had been identified as having been affected by the floods.

He said the situation arose after three rivers — the Birim, the Densu and the Ayensu — overflowed their banks, entered many homes and displaced many of the dwellers.

Mr Kodua further indicated that some mud buildings at Akwadum in the New Juaben North municipality, as well as Asokore Zango, collapsed and displaced many households.

He said 45 mud houses collapsed at Akwadum, with the affected people losing their personal belongings running into thousands of Ghana cedis.

He said areas that had been hit by serious flooding had been experiencing it anytime it rained heavily.

He expressed regret at the fact that people continued to encroach on and at the same time build on water courses, in spite of the devastating impact of their actions, as the structures on water courses impeded the flow of water, leading to flooding, a regular recurrence anytime it rained.

The MP urged the flood victims to exercise restraint, as engineers worked assiduously to find a lasting solution to the problem.

She indicated that many house owners were being prosecuted at the court to dissuade others from building on water courses.

Madam Asante noted that the bridge over the Densu River at Akwadum was the worst affected in terms of the flooding situation in the municipality.

The Eastern Regional Director of the Ghana Highway Authority, Patrick Okoto, expressed worry over the recurring flooding anytime it rained and called for a stronger collaboration among the relevant institutions to resolve the issue.

He emphasised how necessary it was for all government departments and agencies to come together and tackle the flooding situation in the region to save lives and properties.

Earlier, the victim at Asokore Zango had been identified as a 45-year-old taxi driver, Zakaria Hamidu.

The Chief of Asokore Zango, Alhaji Umar Faruk Bello, confirmed that Hamidu, a Muslim, had already been buried, in line with Islamic tradition.

He also said valuable personal effects and electronic gadgets valued at thousands of Ghana cedis were lost in many homes in the area as a result of the floods.

Some of the flood victims also shared their experiences with the Daily Graphic.

For instance, a resident of Asokore Zango, Sumaila Sabila Bobil, popularly called School Fees, narrated how he struggled to salvage items such as a television set, a laptop and a home theatre, all of which got damaged and could, therefore, not function.

He said although the flood victims expected NADMO officials to visit the area and present them with some relief items, nothing of that sort had happened.

Another victim, Sharatu Tahiru at Akwadum Zango said the flood waters of the River Densu and its tributaries overflowed their banks and entered their homes, destroying property.

She said valuable items in her room were destroyed and appealed to the government for assistance.

DISCLAIMER: The Views, Comments, Opinions, Contributions and Statements made by Readers and Contributors on this platform do not necessarily represent the views or policy of Multimedia Group Limited.
Tags:
Eastern Region
Floods
National Disaster Management Organisation (NADMO)