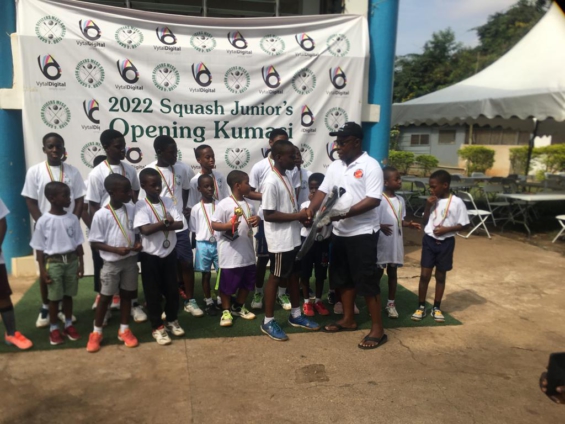 The 4 Garrison Officers Mess Squash Club has organized the maiden edition of the Squash Junior’s Opening at the Club’s court in Kumasi.

The young squash players in Kumasi created a fun-filled atmosphere and thrilled the experts and members of the 4 Garrison Officers Mess Squash Club.

Awal Barba Arlaji lifted the trophy for the 6-8 age category, Kwadwo Dekyi came second to pick the silver medal while Kwabena Bonsu settled for bronze in this category.

For players in the 9-11 age category, Nana Yaw clinched gold and was given a stunning trophy. Yaw Nimo won silver with Selassi coming third to pick the bronze medal.

Captain of the 4 Garrison Officers Mess Squash Club, Lawyer Francis Koffi who was satisfied with the performance of the young chaps in the squash competition.

“Squash is like an endangered lesser sport and we have decided that, there is the need for us to bring in younger players to take over from us because if you go around the country, the average age of a squash player is about 20 or 25 so there was the need to bring in fresh blood.

“It’s been excellent, it’s even beyond our imagination because we didn’t expect to have this number of players, more so, the competitiveness of the games that they played, it was fun and encouraging.

“We now know that, squash has a good future in Ghana,” he said.

The winners of this year’s Squash Junior’s Opening, will be in Accra to join the Tesano Squash Club and Achimota Squash Club in the coming days to get them active and continue preparations for upcoming events including January’s family day for the kids.