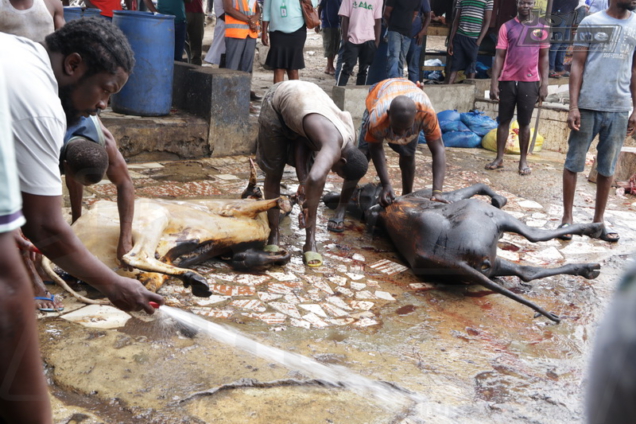 Four workers at the Avenor slaughterhouse, which was operating illegally, have been isolated after a compulsory medical screening revealed they had contracted Typhoid Fever and/or Hepatitis B.

The screening exercise was conducted by Public Health Officers of the Accra Metropolitan Assembly after it emerged that over 200 of the workers there did not have medical certificates.

In the past year alone, at least three visits had been undertaken to this same slaughterhouse, with a caution for its operators to ensure adherence to sanitation standards.

But like the mouse when the cat is away, the departure of the officials also meant the return to flouting the regulations.

In June, the team was greeted by open drains which had been choked by excrement from the intestines of the slaughtered animals.

As flies besieged us in the yard, the pungent smell from the gutters at the abattoir was also in a strong contest for our attention.

Director of Public Health at the Accra Metropolitan Assembly, Florence Kuukyi, ordered immediate cleaning of the slaughterhouse with a screening exercise scheduled for later.

“So as we are standing here, we are commanding all of [them] to go and get brooms to clean the place right now. If they don’t do it, we are closing down the place. After that, all of them must be tested before they are allowed to handle meat here,” Florence Kuukyi said.

The AMA sanitation officers witnessed an improvement at the Avenor Slaughter slab on the second visit after an earlier visit last month.

The facility, which is the only functioning slaughterhouse in Accra, attracted public attention after it emerged that animals were being killed at the almost open-air slaughterhouse under highly unsanitary conditions.

“So as we are standing here, we are commanding all of [them] to go and get brooms to clean the place right now. If they don’t do it, we are closing down the place,” Florence Kuukyi screamed.

On the second visit, however, she said, “we can see about some 45 per cent improvement in the conditions here, and the operators have shown commitment to improving the situation”.

“It’s not all done. They have promised to tile the place and construct a fence wall to keep rodents, insects, and other animals out”, she added.

For the workers on duty, they were observed to be possessing AMA medical certificates. They were also wearing their facemasks and had stopped recycling dirty water to wash the carcasses of the slain animals.

“We are happy about what you people are doing. Cleanliness is next to godliness. Even if you live in a house, you’re expected to clean it when you wake up. How much more where you work,” one of the workers told the Joy Clean Ghana team.

“We came all the way from the North, and we now have a job. We don’t want it to be shut down, so we will obey all the regulations given”, another said.

AMA officials say they are impressed by the efforts being made by managers of the slaughter to upgrade the facility.

DISCLAIMER: The Views, Comments, Opinions, Contributions and Statements made by Readers and Contributors on this platform do not necessarily represent the views or policy of Multimedia Group Limited.
Tags:
Accra Metropolitan Assembly
AMA
Avenor