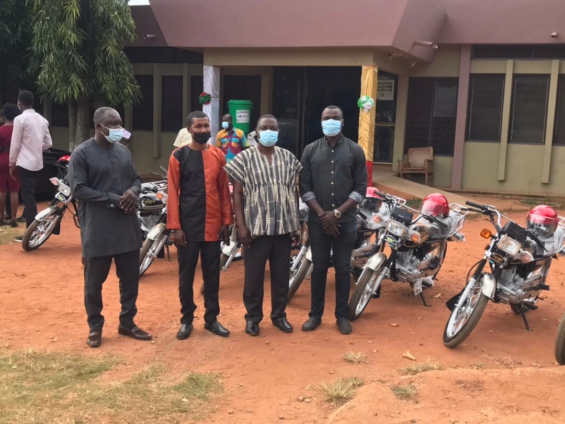 Ministry of Local Government and Rural Development has presented a total of 416 motorbikes to be distributed to all Assembly members in the 11 Municipal and District Assemblies of the Bono East Region.

Bono East Regional Minister Mr Kwesi Adu Gyan who handed over the bikes to representatives from the various Assemblies at a brief program in Techiman indicated that the gesture forms part of the local government’s commitment towards empowering and equipping the various assembly members as a means of deepening democracy at the grassroots level.

“As you are aware, we have 11 Municipal and Districts in the region and it is one of the responsibilities of government to make sure that the assemblies are equipped especially when it comes to the mobility of the Assemblymen and women. Most of these Assembly members live in the very rural areas and they spend a lot of time helping to deliver their mandates and for that, these bikes would help them in delivering these services effectively,” he said

He however charged the beneficiaries to ensure that they acquire the needed riding documentations and work towards instilling discipline in line with maintaining these motorbikes.

“Having been given these bikes alone is not a license that you can ride anyhow. I want them to acquire the necessary legal documents that enables them to ride including license, insurance and I’ll also ask them to maintain discipline especially in its maintenance so that the motorbikes do not go bad”.

Municipal Chief Executive for Techiman Mr John Kofi Donyina thanked the ministry and added that the Assembly would together with the DVLA hold safety workshops for the beneficiaries to ensure that they ride with care.

“I’m very excited this afternoon because previously, these motorbikes are delivered at the latter part of the tenure of these Assembly members but to receive it early this year means we have it at the right time and I wanna thank the sector minister for this move because it would deepen the local Assembly system”.

“We are going to liaise with the DVLA to organize a workshop for us to learn more about the safety procedures for the use of these motorbikes to ensure they are used effectively without involving in any accidents”. He further noted

On the part of the beneficiaries, Assembly member for the Kenten Electoral Area Hon Issah Adams says the intervention is timely and would help in the delivering of their various duties.

DISCLAIMER: The Views, Comments, Opinions, Contributions and Statements made by Readers and Contributors on this platform do not necessarily represent the views or policy of Multimedia Group Limited.
Tags:
Assembly Members
Bono East Region
Kwesi Adu Gyan
Ministry of Local Government and Rural Development
Motorbikes distribution