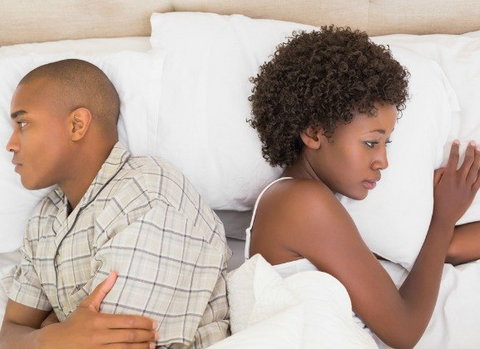 Many times, when couples break up, one of them will say that they didn’t see it coming, or it just came out of the blue. In reality, you failed to read the signs leading up to the split.

It was clearly in front of you, and now it’s too late.

It’s never really over until it’s over, but there are red flags of relationship problems you don’t want to miss because they spell disaster.

Hopefully, if you spot one of these 5 signs, you will be able to fix your relationship problems before it’s too late:

1. Not fighting anymore is a BIG sign of problems in your relationship.

Lookout when you stop fighting because that means your boyfriend, wife, or partner has checked out of the relationship permanently.

Things are so bad, they have left emotionally and it’s only a matter of time until it’s official.

This is when they have given up and stopped investing emotionally.

2. You live separate lives, or you are more like roommates.

When you have no idea or care in the world where your partner is or what they are doing, this spells trouble. Maybe it starts innocently enough, but it will be over soon enough. If you work separate schedules, invest in the kids but not your relationship, or spend all your time hanging out with your friends, it’s over.

You just can’t tune out your spouse. If you aren’t regularly calling because you want to during the day to see how their day is going or showing you care, it won’t last. If there is a lack of affection and intimacy, eventually the relationship will burn out.

You need to laugh often, and feeling like you have a connection and bond.

3. You are more likes best friends than lovers, and that will always lead to serious relationship problems.

I hear this one a lot. When there is a lack of attraction, but the person is so great on paper, you marry them anyway. You assume it will get better, but it never does. Maybe they have the perfect job and education, and your family approves, but you don’t feel madly in love.

If they have never made your heart skip a beat, then they aren’t for you and it will be over.

The trouble is that a lot of people wind up in this situation. You were meant to be friends, but just not in a romantic relationship.

If the attraction was there before, then it’s still there, you just need to rekindle the passion.

4. You haven’t addressed a long-standing problem in your relationship.

It’s been a long time and the issue hasn’t changed.

Maybe your partner has a drinking problem or anger issues. It could be anything and not necessarily a fatal flaw. It could happen if you want him to pitch in with the children, so you aren’t overwhelmed. Perhaps he thinks you are too critical.

The point is, if they have asked you to work on it, go to marriage counseling, or brought it up several times and there is no movement in the direction of change, your relationship has problems.

Not addressing an issue that your spouse is unhappy over is a ticking time bomb.

Everyone wants to be heard because it shows that they care.

5. If your spouse or partner is becoming more separate from you, or is changing a lot, that can be a bad sign for your relationship.

Maybe there is this sense that they are becoming more separate from you, and it’s because they are disengaging from you at least on an unconscious level prior to the physical breakup.

Lots of times, it’s because they are cheating, but it can also be when lifestyles change drastically.

If you marry young, this can happen. Suddenly, your spouse wants something different out of life. If you have different goals and start becoming different people, going in different directions, you are on the rocks as a couple.

If your partner starts dressing differently, starts developing different tastes when it comes to music and food, it’s because they’ve changed and they’re trying to reestablish their identity as an individual as opposed to as part of a couple.

They could also be cheating. Either way, these are big signs of relationship problems, and it’s time you address them.

Either way, it’s over.

DISCLAIMER: The Views, Comments, Opinions, Contributions and Statements made by Readers and Contributors on this platform do not necessarily represent the views or policy of Multimedia Group Limited.
Tags:
Big trouble
Relationships
Sneaky Warning