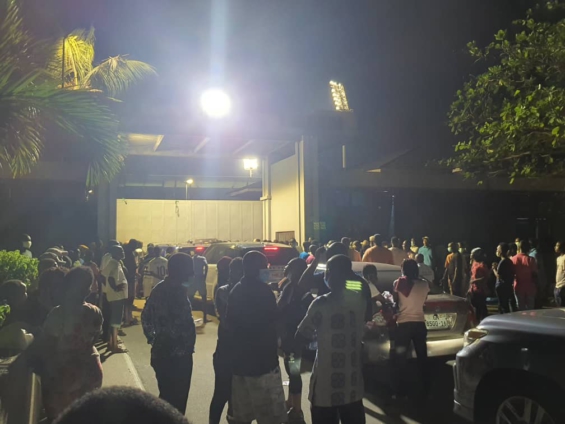 Hearts of Oak and Accra Great Olympics clashed at the Accra Sports Stadium, with more than bragging rights on the line.

The match, at least because of the unrivaled attention by the media had moved from just a top of the table clash to a truly anticipated derby with bundles of tension.

In the light of Covid-19 protocols prescribed by the Ghana FA and the 25% capacity allowance, I was expecting fans of the traditional clubs to troop in, but what I saw was far beyond what I could imagine on a Sunday night game involving the two Accra rivals.

It felt like a proper Hearts – Kotoko fixture with Accra actually coming to a total halt, as traffic built-up all the way from the National Theatre and its environs, down to the Accra Sports Stadium.

The game kicked off with a large number of fans – possibly north of the set 25%, roaring and cheering to every kick of the ball within the white lines, of the green grass of the Accra Sports Stadium, but beyond the gates was another derby, fought in flesh and without broadcasting favors from the media.

Scenes that met me on arrival did suggest I was in for a big fight to get into the Accra Stadium at 5.45 pm , Knowing the standard set for these top fixtures because of poor management of fans means you must arrive at least three hours before kickoff to secure your spot whether as a fan or journalist.

Whilst in my car looking for a parking slot which will took ages for a game of this nature – I caught a glimpse of Chelsea star, Callum Hudson-Odoi virtually being carried into the stadium by four police men due to the overcrowding outside. I weighed giving up and returning to the office to watch the game, but soon found a parking spot and began my “real game” outside the stadium.

All stadium gates were firmly shut including those with access to the media stand where I was required to show my Multimedia identity card to enter.

I gathered because fans had overpowered stadium security twice and broken into the stadium, they were not willing to give it a try, irrespective of the dignitaries, fans, media men outside eligible to enter. I was sure of this because the men I met outside had tickets , complimentary tickets or requisite accreditation to watch the game .

It was a tall list of honorable men who really deserved to be inside the stadium watching the game but had been reduced to, listening to radio commentary in their cars, watching the game via the Startimes app on their phones, or constantly trying to explain to the adamant security why they deserved to get in.

While all this was ongoing – the game was underway a wall away and the chant, cheers and jeers were clearly heard where we stood in the breezy night of football rivalry. Many of the fans who were still trying to get in would occasionally rush towards the gates, but the security personnel limited in number would disperse the crowd at times with electric shockers or brutal force – it became apparent we may not get to watch the game as the situation hardly improved at half time.

The sight of top dignitaries getting frustrated and leaving the stadium was a sad one – the fans who had made me out asked me to help out, but there was little success anytime I tried to do just that. In the end, I hopped into Yusif Chibsah’s car as the gates were narrowly opened to get into the stadium – I could bet many more were going to leave disappointed and few who would get in finally only able to catch a few seconds of the game.

I was fortunate to see the Great Olympics equalizer by Maxwell Abbey Quaye but the experience out there kept me thinking, especially after speaking to Hearts of Oak and Great Olympics legends who missed out on the game.

Lack of advanced tickets played a major role in having masses outside the stadium. The Ghana FA as part of Covid-19 protocols had insisted that clubs go down the lane of selling tickets before hand to avoid the overcrowding at the stadium. If fans have tickets or complimentary tickets of which are catered for with the 25% capacity provision in mind, there would be no crowds at the gate. This rule was flouted by the organizers.

Once clubs have been instructed to sell advance tickets, there are only three situations involved here; people are coming to match venues with either advance tickets, complimentary tickets or accreditation cards and this means before games, the numbers expected at the stadium should be known and very controlled.

Inadequate security personnel on the day exposed the fact that organizers underrated the game of such magnitude. Fans broke in twice by simply overpowering few policemen available – that’s why they took the simple approach of permanently shutting all gates without considering there were key stakeholders and dignitaries who hadn’t made their way in yet. These pockets of incidents around the stadium could easily have developed into fully blown stampede scenarios.

Enough security personnel will see the barricades mounted at vantage points such that fans are properly checked and ushered into designated areas to avoid confusion, while keeping them off critical areas like the VIP entry and media gates.

The Mantse Derby surely served as a test, though the Ghana Premier league failed, there is a second chance to right the wrongs when Asante Kotoko play against Hearts of Oak in a potential title decider on July 4.

Forget about the action on the pitch in these crunch games, it’s more about the match organizers need to win in the hearts of fans by creating an experience that would have a lasting effect and encourage them to come in droves the next time.