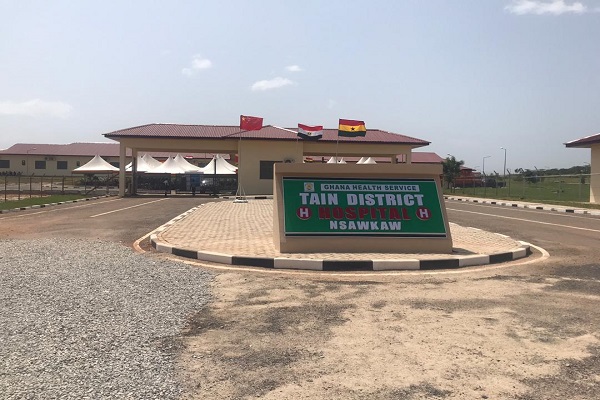 The Tain District Hospital in the Bono region, will be opened for full operations from Monday, September 6, 2021.

The Medical Superintendent of the hospital, Dr. Richard Adinkra Kyeremeh, who disclosed this on the Wenchi-based Radio West Africa, stated that the facility will be operating with specialties in Radiology, Equipment and Ultrasound, Echocardiography as well as Orthopedic among others.

President Akuffo Addo on Friday, November 6, 2020 inaugurated the 60-bed district hospital to serve 30,000 people in the district and its adjourning communities.

Dr. Adinkra Kyeremeh, expressed disappointment in some people referring to the facility as an abandoned project.

“The hospital, after the inauguration by the President had to go through various preparatory processes behind the scenes to get it operational, so I cannot agree with those people saying that the hospital has been abandoned.

The most important thing now is that the facility will fully take-off on Monday to serve our numerous eager clients,” he stressed.

Meanwhile, the Member of Parliament for the Tain Constituency, Sulemana Adams, in a telephone interview said, the announcement of the hospital’s full take-off is good news although he admitted that the project was indeed abandoned by the current government.

“I will be surprised that the medical superintendent states that people are running commentary that the hospital was abandoned, because that is the word.

The hospital was actually abandoned from 2017 up to the later part of 2019 when the contractor came back on site,” the MP stated.

He is however satisfied with the fact that people of the Tain Constituency will finally have access to improved quality health care.