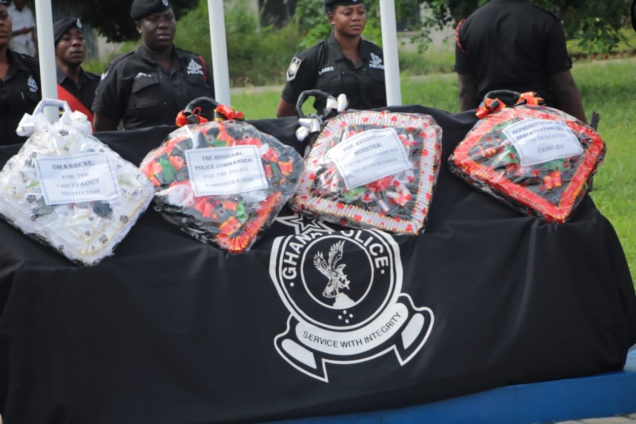 Some seven police officers who died while performing their duties from 2016 to 2022 have been remembered in a memorial day observation in Eastern Region.

The ceremony held at the forecourt of the Eastern Regional Police Headquarters brought together bereaved families and officers from other security services.

The officers killed in line of duty are General Constable Chris Quarshie with the Koforidua Police Division who died in last year; General Corporal Nathaniel Afriyie Marfo and General Lance Corporal Balatinang Katapranang Kwasi both at Nkawkaw Division died in 2017 and 2021, respectively.

The rest are Lance Corporal Alhassan Asare, General Lance Corporal Joseph Yankey all of the the Akyem Oda Division who were killed in 2019 and 2020, respectively.

The bereaved family members present could not hold back their tears as they reminisced the callous deaths of their beloved ones.

In a brief sermon, the Regional Police Chaplain, Rev Chief Inspector Godwin Kumatror, called on the police personnel to commit themselves to their chosen endeavours in spite of the huge task they face in line of duty.

Some members of the bereaved families urged the police administration to facilitate justice for the police officers by arresting and prosecuting their assailants.

They also bemoaned delay in payment of financial entitlement due the slain personnel.

The Eastern Regional Minister expressed deepest condolences of government to the bereaved families.

He acknowledged sacrifices of police personnel in protecting lives and property and keeping the region relatively peaceful.

DISCLAIMER: The Views, Comments, Opinions, Contributions and Statements made by Readers and Contributors on this platform do not necessarily represent the views or policy of Multimedia Group Limited.
Tags:
Eastern Region
Eastern Regional Police Command
Police officers
Seth Kwame Acheampong