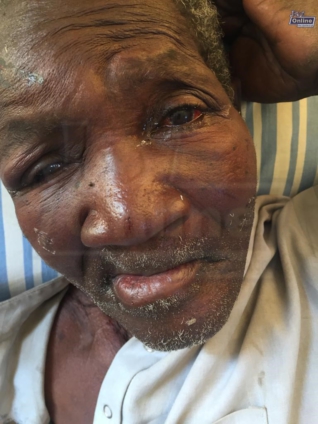 A 70-year-old peasant farmer in Damongo, Mr. Abia, is currently battling for his life at the West Gonja Hospital after being beaten by some residents who accused him of having caused deaths of their relations.

The visibly weak victim is among a few men in the region who are alleged to be wizards.

Mr. Abia was compelled by his assailants to admit being behind the deaths of some three young men in the community, but he denied the allegations. Hence the attack.

His oppressors did not stop there. They dragged him to the residence of a witchdoctor to extract a confession from him. But when he once again, denied any wrongdoing, his accusers tortured, molested and left him under the scorching sun.

He was however, later recused by his children and rushed to the hospital.

Sources at the Damongo Divisional Police Station indicate that the Police are yet to commence investigations into the case as they await medical report from the hospital.

Mr. Abia’s attack brings to three, the number of such incidents whereby victims are openly accused and tortured in broad day light in the region.

Last year, a ninety year old Akua Denteh of Kafaba near Salaga in the East Gonja District, was accused of being a witch and tortured to death. Shortly after Kafaba, fifty-five year (55) old Mariam Iddrisu and two other women at Supimnin in the West Gonja Municipality were also accused and tortured and are currently living with scars all over their bodies.

Meanwhile, their oppressors, who escaped into the bush, have returned to the communities.