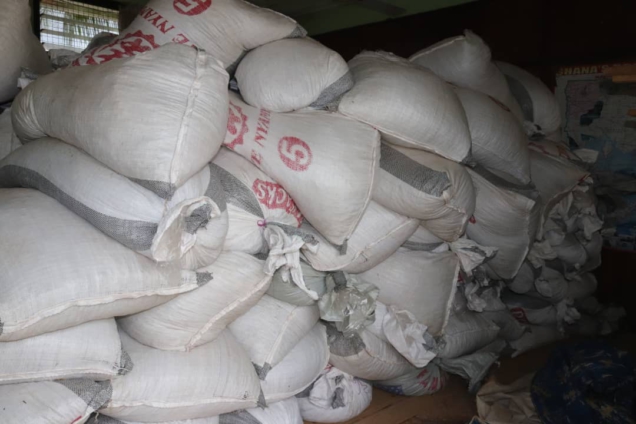 Immigration officials and COCOBOD intelligence unit have intercepted 79 unstandardised bags of cocoa beans that were being smuggled into Togo last Friday.

The cocoa beans were being smuggled on board five motor tricycles through an unapproved route on the Akanu border in the Ketu North Municipality in the Volta region.

Two immigration officers on duty on that route were able to overpower the five smugglers to take custody of the coco beans.

This is yet another interception based on intelligence and collaboration from some community members.

The interception was done about 01:48am, according to immigration officials.

Sources say there was initial resistance from the five smugglers until the two officers on duty over powered them with one of the officers getting injured on the hand.

The five smugglers, officials say are on self-cognisance bail with their motor tricycles as sureties.

The sector commander at the Akanu border, Assistant Commissioner of Immigration, Felix Agyeman Bosompem, said the command needs more support from the community to enable it prevent some of these smuggling activities.

“Recently, we intercepted some vehicles, planting for food and jobs fertilizers, as well as agro chemicals, some quantities of marijuana and just a few days ago, these sacks of cocoa beans that were al being smuggled into neighbouring Togo.

“We are appealing to the public that we are in this together, so they should assist us in volunteering information.

“They should be assured that we would protect their identity,” he said.

With only two patrol vehicles, two motorbikes, with some officers fuelling and using their personal motorbikes for patrols on a large duty points, ACI Felix Bosompem has asked for support to enable the areas under his command receive the necessary surveillance.

For COCOBOD CEO, Joseph Aidoo Boahen who was in the region a week ago, those who continue to smuggle cocoa beans and other COCOBOD products into neighbouring countries are devils.

“What I will say is that, those who are involved in the smuggling are devils, they are devils to the nation, because only a devil will do that.

“You know on Sunday they go to church, I believe and then on Fridays maybe they also go to the mosque, but at the end of the day they decide to smuggle cocoa into Togo.”

Mr Boahen said this when he interacted with the media in the Oti region during his recent tour of cocoa farms in both Oti and Volta regions to assess the impact of various interventions being rolled out by COCBOD and government.

The Deputy Intelligence Manager for Oti and Volta, Wisdom Dela Amehame said continuous smuggling by farmers and other individuals would only deny the state the needed revenue for development.

JoyNews sources say these bags of cocoa beans belong to an individual who buys from farmers and smuggle into Togo.

One major issue of concern to the Immigration Officials is the unavailability of a reliable telecommunication network for effective communication at the border area among officers.

DISCLAIMER: The Views, Comments, Opinions, Contributions and Statements made by Readers and Contributors on this platform do not necessarily represent the views or policy of Multimedia Group Limited.
Tags:
Akanu border
Cocoa smugglers
COCOBOD