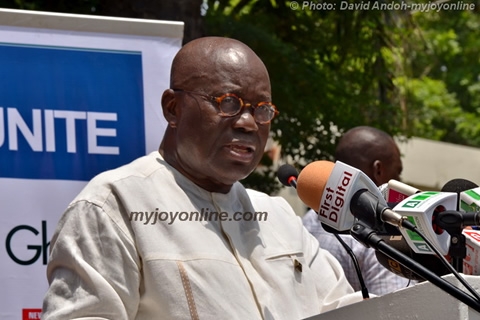 About 900 Assembly members from various regions in Ghana have declared their support for Nana Akufo-Addo’s candidature ahead of the New Patriotic Party’s upcoming national delegates’ congress to elect a flagbearer for the 2016 election.

The assembly members say their decision to visit Nana Akufo-Addo and declare support for him was informed by a research they conducted.

In an interview with Joy News, the leader of the delegation, Kwabena Senkyire said the research showed massive support for Nana Akufo-Addo to become flagbearer of the NPP and President of Ghana, hence their decision to meet with him and express their support.

He explained that, “We sent some young men and [women] to do the research because from our electorates they are warning us that they want to enjoy the free education just like National Health Insurance.”

“We the assembly members are not being paid but our electorates come to us for assistance. We don’t have. Everybody is feeling the heat so we just came to throw our support [behind Nana Akufo-Addo] because the electorates say they won't vote if its not Akufo-Addo."

Meanwhile, Nana Akufo-Addo, who received the delegation, expressed confidence that the fortunes of the country will turn around if the NPP is voted into power during the next elections

According to him, Ghanaians have decided on democracy and a non performing government is always voted out by the power of the thumb.

Nana Akufo-Addo thanked the Assembly members for the support and said he is hopeful of winning the party’s flag-bearership. He said the NPP has got what it takes to turn the country’s fortunes around.