A-G, Chieftaincy Ministry must constantly engage Chiefs to conscientise them on their role – Isaac Adongo 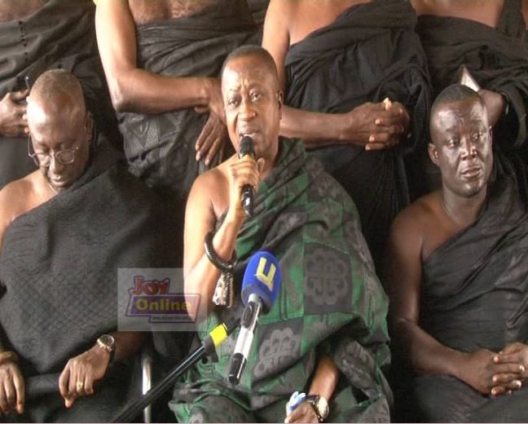 Member of Parliament for Bolga Central has urged the Attorney-General, Godfred Yeboah Dame and the Chieftaincy Minister, Ebenezer Kojo Kum to conscientise Chiefs on their roles.

This, according to Mr Isaac Adongo, is because new chiefs are appointed on a regular basis, so education and sensitisation will help them become acquainted with their roles as prescribed by the 1992 Constitution.

“I think that the Attorney-General’s Department and the Ministry of Chieftaincy ought to have a deliberate programme of engaging our Chiefs and sensitising them,” he said.

Mr. Adongo made the remark while contributing to a discussion on JoyNews’ Newsfile on Saturday.

The Council’s Acting President, Baffuor Amankwatia VI, who is the Bantamahene, made the announcement when a team from Oyerepa FM and TV appeared before the Traditional Council to offer an apology over remarks made by Akwasi Addai ‘Odike’ against Manhyia on their network.

The Executive Director of the Center for Democratic Development (CDD), Professor Henry Kwasi Prempeh also called on the state to draw clear lines between its sovereign powers and that of traditional authorities.

According to him, if this is not done, traditional authorities may cross their boundaries in the exercise of the powers conferred on them.

The law professor stated that, under the 1992 Constitution, traditional authorities are given a certain degree of power to govern affairs in their respective jurisdictions.

The exercise of these powers, he said, must however be regulated by the state to prevent excessiveness and abuse.

Citing the shut down of Kumasi-based Oyerepa FM by the Kumasi Traditional Council, he said, “The state in these matters appears not to be asserting its sovereignty. So when these things happen, the state turns to be like a bystander, it’s like a spectator, looking on as these things happen”.

In compliance with the Council’s directive, Oyerepa FM shut down on Friday, 26 August 2022.

DISCLAIMER: The Views, Comments, Opinions, Contributions and Statements made by Readers and Contributors on this platform do not necessarily represent the views or policy of Multimedia Group Limited.
Tags:
Attorney General
Chieftaincy Minister
Isaac Agongo
Oyerepa FM