A historic win. The National Spelling Bee has not one — but 8 champions

Can you spell history? The 92nd Scripps National Spelling Bee had an epic ending with eight co-champions.

The spelling bee was finally over after it went 20 rounds, which included a run of 47 correct words.

Thursday night’s unprecedented decision was made after round 17, when it was announced that while there were plenty of words left in the dictionary, there were only enough challenging words for three final rounds.

“We have plenty of words left on our list but will soon run out of words that would challenge you,” said the Bee’s official pronouncer Dr. Jacques Bailly, calling those remaining in the 17th round “the most phenomenal assemblage of super-spellers” in the competition’s history. The crowd agreed with a standing ovation.

And, sure enough, all of the competitors from round 17 made it to the end.

Thursday night’s finals went on more than an hour and half past the scheduled time with words like omphalopsychite, Geeldikkop and auftaktigkeit.

Spellcheck may not recognize these words, but the champions sure did.

Five rounds and 47 words in a row were spelled perfectly. Each of the eight champions will receive a $50,000 prize.

Even as the night grew late and the tension ran high, many competitors would still offer high fives or a clasp of hands as another student prepared for or came back from successfully spelling their word. By the end, it was full hugs of support for one another.

The kids got tired, some misheard words at times, but their determination never broke as they carefully worked through each spelling. 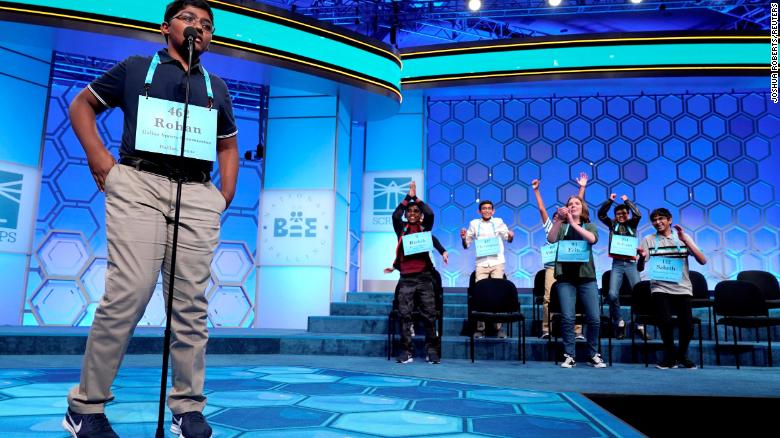 Rohan Raja, 13, of Irving, Texas, spells the last word in competition as the remaining competitors celebrate an eight-way tie.

Rohan bemoaned to Bailly how funny he sounded pronouncing two of his words in a row with guttural noises, but that didn’t rock his performance.

And, once it got late, Rishik spoke for everyone in the audience by tiredly asking what the time was when he went to spell his word. It was 11:18 p.m. Almost an hour past the scheduled end time. 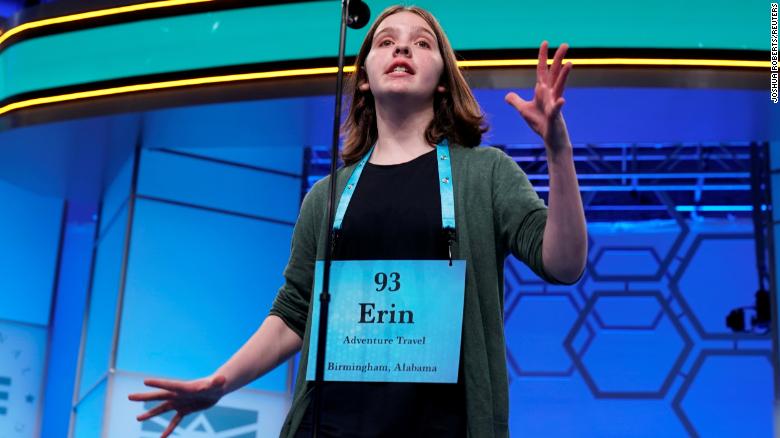 Erin Howard, 14, of Huntsville, Alabama, one of eight co-champions, reacts to her final word in the final round.

Erin was exuberant for much of the competition but was brought to near tears of happiness when she heard the word that, if spelled correctly, would make her one of the champions: erysipelas. She knew she had it before she even began spelling. 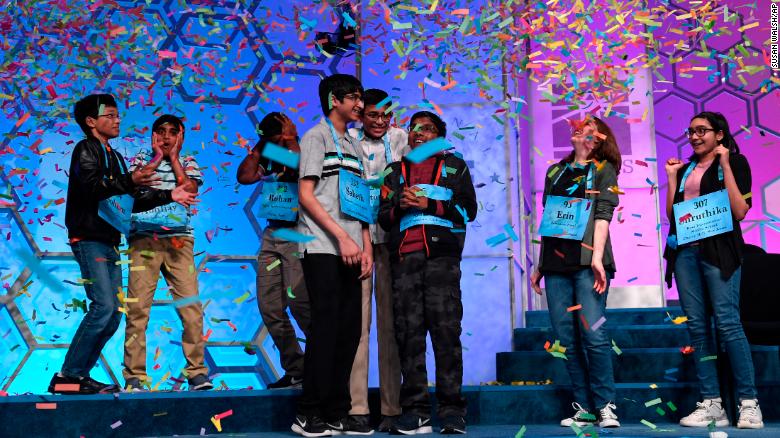 This year’s competition started on Sunday with 562 spellers — all of whom are 15 or younger but have not passed eighth grade — who made it to the national stage. Contestants came from all 50 states, as well as several territories and other countries including the Bahamas, Canada, Germany, Ghana, Jamaica, Japan and South Korea.

Most of the competitors attend public schools.

And the words they spelled are not on a regular middle school spelling test. This feat takes hours of repetition, coaching from a teacher or loved one, and study of etymology, or the origin of words.