A review of Right to Dream graduates 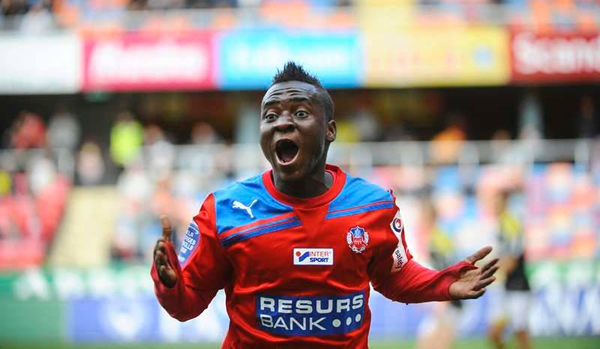 Right to Dream’s graduates notched up as many as five goals, coupled with some assists in this week’s round-up of performances of RtD graduates in America and Europe.

We start off our professional players review in Sweden where David Accam scored his 10th goal of the season as Helsingborg returned to winning ways with a 4:2 win over Halmstad.

Accam’s beautifully taken volley inside the 18-yard area set the tone for his side’s victory. The Swedish giants now lie third on the log, five points away from league leaders Malmo FF, with three matches to end the league.

Thomas Boakye was on target on Saturday evening for Ostersunds FK as they defeated visiting Orgyte 2-1 at the Jamkraft Arena in the Swedish Superttan League. Boakye tapped-in from close range to open the scores in the first half.

In Finland, Thomas Agyiri helped his side to secure victory, scoring his debut goal and providing two crucial assists as TPS beat Jaro 3:0. Agyiri, who was making his ninth appearance for his club, has been a very consistent performer for the Finnish side since joining them this season.

Lastly, Godsway Donyoh helped Djurgarden’s to record a 2:1 home win over IFK Goteborg, to maintain their record of five matches without defeat.

We start off in the USA where James C. Nortey scored the crucial goal to propel the Marquette University men's soccer team to a 1-0 victory over his fellow graduate, Oscar Umar’s Villanova University soccer team on Saturday, in the BIG EAST Conference play.

It was the second time during the Golden Eagles' three-game road swing that C. Nortey provided the game-winner; Nortey also notched the decisive goal in Marquette's 1-0 win at Xavier a week ago. Nortey tallied his fifth goal of the season, and fourth career game-winner.

Elsewhere, Joshua Yaro was the hero of the day as the Georgetown University men's soccer team defeated the American University Eagles 1:0.Yaro's late header helped the Hoyas finish nonconference play with a mark of 6-2-1.

Fresh from being named Hobart College player of the week in September, Bernard Abagali provided the crucial assist as Hobart College beat Ithaca College 1:0 in a non-league match.  Abagali shares a team-high with three assists.

Isaac Normesinu provided his third assist of the season but Boston College lost 1:2 to No. 8 Maryland on Friday night in front of 3,326 fans at Ludwig Field. Normesinu, a freshman, has tallied three assists and a goal so far.

Graduate Fifi Baiden sealed victory for the University of California, Santa Barbara soccer team in their 3:0 away victory over Cal State Fulerton. Baiden’s goal was his first, this season.

RtD has 28 graduates in High Schools, Colleges and Universities in the USA and UK, as well as over 15 professional footballers in Ghana and Europe.