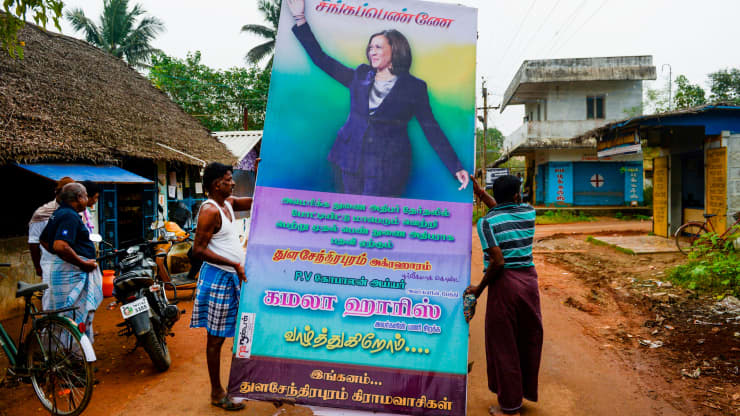 As Kamala Harris made history on Wednesday when she was sworn in as the first female, Black and South Asian American vice president of the United States, a tiny village in India celebrated her ascension in politics with firecrackers and prayers.

Harris, 56, is a daughter of Indian and Jamaican immigrants.

Her maternal grandfather was born in the village of Thulasendrapuram, about 215 miles from Chennai in the southern Indian state of Tamil Nadu more than 100 years ago, the Associated Press reported.

Groups of women in bright saris and men wearing white dhoti pants — a type of sarong worn by men in India — watched Harris’ inauguration live in Thulasendrapuram, according to the AP. The villagers chanted “Long live Kamala Harris” while holding portraits of her and blasted off fireworks the moment she took the oath, the AP reported.

Harris’ late mother, Shyamala Gopalan Harris, was also born in India before she moved to the U.S. to study, where she received a Ph.D in nutrition and endocrinology from the University of California at Berkeley, and met Harris’ father, Donald Harris. On numerous occasions, Harris has credited her mother with being a “force of nature and the greatest source of inspiration in my life.”

It takes a village to celebrate Kamala Harris

Celebrations begin after she’s sworn in as the U.S. vice president

DISCLAIMER: The Views, Comments, Opinions, Contributions and Statements made by Readers and Contributors on this platform do not necessarily represent the views or policy of Multimedia Group Limited.
Tags:
India
Kamala Harris