A working woman: A security guard 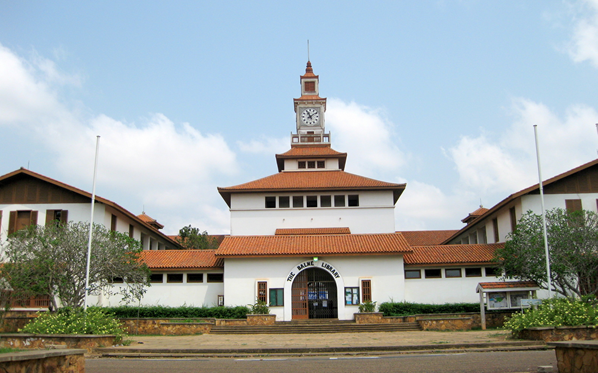 I have a post on RamiTalks titled A Working Woman. Find it and read it, and then come back here so I can finish telling you about a Security Guard.

Let’s start at the beginning. I noticed her because she has the most delightful smile. Her face is plump, she smiles easily, and when she smiles her eyes vanish. It is truly charming. A security guard?

She was born in 1993 in Achimota, and she has been around Achimota for her whole life. The last of 5 children, she has two brothers and two sisters. She attended Anunmle Primary and JHS. After completing her JHS she sat at home for two years because of financial issues. During that time she helped her Mum, a lady who sold fried yam. She finally went to Osu Doku Sec. Tech. for her SHS education. Her results were not brilliant.

So she went into trading with a woman who sold ‘hardware’ like padlocks, but that only lasted two months. After that, she taught Primary and Nursery classes for two years. Then she married a neighbour in January 2015 when she was 21. Life has been interesting since then.

She did a two-year diploma in Adult Education as a mature student at the University of Ghana. She discovered she was pregnant when she began the program and gave birth during the program. After a short break, she continued, moving into a hostel with her baby and sister. It was very stressful, especially since the distance between the hostel and the lecture halls was not a short journey. She completed the diploma with good results.

She got pregnant again as she was in the middle of a six-month course in Medicine Counter Assistant (MCA, no, I had never heard of it either), and before she finished the diploma at the University of Ghana. Are you following this?? So she would close at the MCA school by 2 pm and go to the University of Ghana, keeping an eye on her baby, and carrying her second pregnancy.

She was successful in the six-month course as well, finishing this part of her life in December 2016. She had her second child in April 2017. Oh, and she found time to do her National Service at UGBS, ending in August 2018. She remained jobless until June 2019 when she found a job as a Security Guard.

But in the meantime she is doing what I understand to be a ‘top-up’, registering for a Post-Diploma in Human Resource Management, a Distance Education program at UEW. She is not done yet, and she attends their weekend campus for this program. Oh, and as part of that course, she is currently at an HR Department as an intern. While she continues to work as a Security Guard.

And where is her husband in all this? She says he is an angel, brought specially for her from heaven. Yep, you heard right. Ghanaian men can actually be praised by Ghanaian women. Apparently he is hugely supportive of his wife’s education and plays a major part in their domestic situation. He works at the University of Ghana and is himself educated.

He has supported her in every way possible, especially financially. And he helps with the traditional ‘Mummy’ duties. This includes preparing the children for school, ironing their school uniforms, bathing them, washing for them, even as the real Mummy is preparing their breakfast and lunch. She has to wake up at 3 am if she is to perform all her daily domestic routine and get to her job as a Security Guard by 5:30 am. Her husband drops the children at school, and they pay a teacher to look after the children until she can pick them up anywhere between 5:30 and 6 pm.

But what about her school work? She studies at night when a sense of panic keeps her awake. And by the way, she doesn’t set an alarm for her 3 am start; she says her sense of panic and fear wakes her up without fail. She is a fast learner and needs minimum sleep anyway. It’s a punishing schedule though. Lectures on Saturday and Sunday, from 7 am till the evening, and then home to cook and wash for herself and her husband. He washes for the children. She says he is a slow washer and if she doesn’t help with that he’ll be washing for two days nonstop. No weekend ‘break’ then…

Are they planning for more children? She is still young. But, not at the moment….but only because she had invasive surgery and has been advised to ‘hold on’ for a couple of years. But all other activities are allowed….for which we thank God.

Unfortunately, she gets harassed by men all the time. She has learnt how to take care of herself though and is not to be toyed with. What do think of female security guards anyway? Do they look weak to you? Or are you easily intimidated by women in any profession? Apart from her eyes that vanish when she smiles (so she doesn’t smile a lot when she is working otherwise she won’t be able to see who is committing a crime), she certainly gets the job done.

The point of all this? The struggle is real, and I am still amazed by the strength, fortitude, endurance, and superwoman capabilities that Ghanaian women possess. I know her story is not unique, but still. Anytime I hear another story like this I am simply blown away. And I thought I had issues…

By the by, when was the last time you met a university student who was working as a security guard….on a university campus?