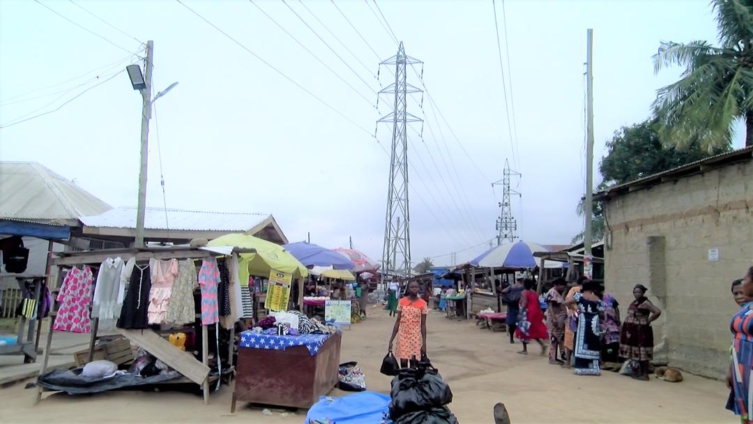 Traders in Mamponteng in the Kwabre district are risking their lives to trade under high-tension electricity lines after being evacuated from an old market facility to make way for new construction.

The Jubilee Market project, housing more than 100 shops, has stalled for over a decade now.

The uncompleted structure is now a haven for the homeless and a fertile ground for maize plantations.

Aggrieved traders clad in red head and armbands in full black apparel vented their discontentment at successive governments for failing to complete an abandoned market project.

Mampongteng resonates on Tuesdays with a cacophony of marketers, attracting hundreds of buyers from adjoining communities.

But a sad reality is that many of the vendors ply their wares by the roadside as an abandoned market ridicules them.

After being evacuated from an old trading centre, traders are now risking their lives occupying a portion of the narrow space under an electricity power gridline.

The traders explain they have to run for their lives whenever the clouds gather.

“It trembles and sparks most of the time. We are always running for our lives. One day it may catch fire and set the entire market ablaze,” she said.

The situation is affecting daily sales in the market.

Akua Nyarko, who has been at the market for close to ten years, says she is incurring sweeping losses.

“The market is small. Because we have no better place, people are now buying from other markets. All monies are all squandered,” she said.

Once the food basket of the Ashanti region, the market fed thousands of households in the northern part of the region but has suffered perpetual neglect.

Chief of Mampongteng, Barima Saasi Ayeboafo II, explains the evacuation of traders to a temporary settlement is now a nuisance.

“The project which led to the evacuation of the traders to pave way for the construction has since displaced the numerous traders in the township who have no alternative space to ply their trade. This has resulted in traders using any available space across the township creating a nuisance with wooden structures in places not earmarked nor suitable for such purposes.

“Trading under an electricity pylon which could trigger a disaster of a national scale if not urgently addressed,” he said.

The edifice which hopefully would be called the Jubilee market is now as dead as a graveyard with weeds marketing itself.

Traditional authorities and traders are forewarning the ruling New Patriotic Party, they as a voting powerhouse of the party, will advise themselves in the next general elections.