Accelerated development to begin in the Volta Region – Togbe Afede 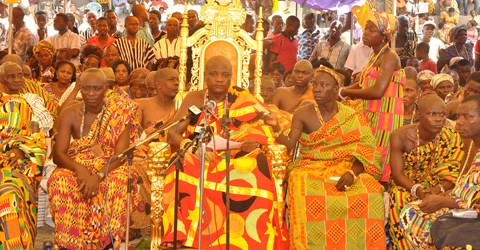 Togbe Afede XIV, Agbogbomefia of Asogli State, has said the Volta-Ningsia Province relationship under the aegis of the Volta Development Plan (VDP) could potentially gross about 500 million dollars in five years.

This relationship, he said, which culminated from a sister cities concept would translate into an integrated agriculture and agro-processing venture, expected to commence at Juapong, by the close of the year.

Togbe Afede said this in an interview with the Ghana News Agency in Notsie, the Republic of Togo during the Agbogboza, which coincided with the pilgrimage to their ancestral home by the Asoglis.

He said products on agenda include cultivation of large-scale crops, vegetables, cereals, cattle, sheep, goats and rabbit with the key element being the breeding and processing of rabbit for export.

A strong-powered delegation of Asogli State Officials, representatives of other Chiefs from the region and businessmen have left for China to broker development ties, explore avenues for further investment and concretise existing memoranda of understanding for works to commence.

Togbe Afede expressed the regret that two initiatives, a 20 million dollar Volta Development Fund (VDF) and the GH¢10-Billion Volta Venture Capital Fund (VVCF) targeted to support the region’s socio-economic infrastructure and development of small and medium size enterprises have collapsed after its inauguration due to apathy.

On a question of sustainability of the VDP, he said the right consensus has been generated as the concept was a Chiefs’-led with the target of mass mobilization of the people.

The Agbogbomefia expressed the optimism that the concept would be replicated in the rest of the Ewe-speaking communities in the West African sub-region.

He said traditional authorities in the region are poised in championing the needed socio-economic growth in the region, in collaboration with government and development partners within and abroad.

Togbe Afede said traditional leadership has evolved and are currently leading the accelerated development and industrialization aspirations of its people and this is unlike in the past where they prosecuted wars and led in the search for territorial advantage and supremacy.

He said some advantaged citizens are pursuing higher education in various fields to perk up the human resource base for a giant economic take-off in the region.

Togbe Afede said as part of the Asogli Yam festivities, the African World Airline would be inaugurated on Friday to begin domestic flight with its two acquired Embraer planes with plans to veer into the sub-region soon.

“We need bold action in all spheres of leadership that will withstand the challenges that confront the teeming unemployed youth or we get consumed by them,” he said.

Togbe Afede said assertiveness, perseverance, imaginative-initiatives, hard work, unity are all pre-requisites for accelerated development which would be regulated by a positive policy direction.