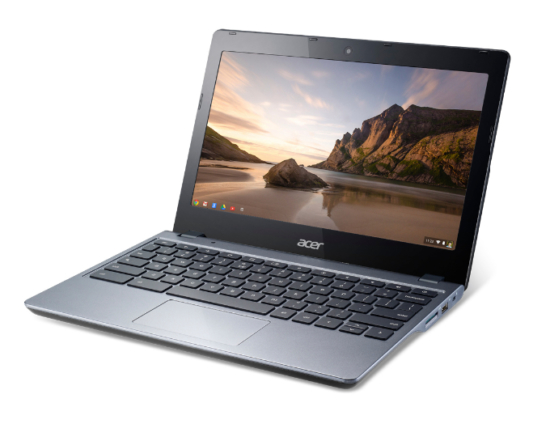 Following last month's brief preview of four Chromebooks powered by a variant of Intel's Haswell processor, Acer is the first out of the gate with an update to the Chromebook C7.
The Chromebook C720 follows last year's Chromebook C710) with hardware that is better, but not necessarily a massive leap forward. The improved specifications are enough for Acer to charge more for the C720, which retails for $249.99 — about $50 more than the C710.

The Chrome OS-fueled C720, which is available on Thursday for pre-order from Acer.com, Amazon.com, and BestBuy.com, doesn't appear to have changed its look much. HP's just-announced ARM-based Chromebook 11, on the other hand, clearly owes much of its hardware design to the Chromebook Pixel. An Acer representative told CNET that the company is aware of HP's Chromebook 11 giveaway, and might be considering something similar for its new Chromebook.

The C720 is expected to begin shipping "within a few weeks," and before the end of the month, the Acer spokesperson said.
Acer says that the C720 is 30 percent thinner than its predecessor, at three-quarters of an inch thick, and its 1,366×768-pixel, 11.6-inch screen has a new, reduced-glare matte display. It's also a quarter of a pound lighter than the C710. But the big selling point is its battery life, which Acer says ought to last up to 8.5 hours, more than double the advertised battery life of 3 hours, 50 minutes on the previous model.

The battery boost comes thanks to the C720's Intel Celeron 2955U processor with architecture based on Intel's next-generation Haswell chip. While the core of the C720 is based partially on the Haswell line, it doesn't bear the Haswell branding because it has different cache levels and different speeds, Intel told CNET in September.
The new model is fairly standard for a Chromebook, with 4GB of RAM, double the base amount of RAM in the C710; an HDMI-out port; SD card reader; webcam and microphone; a 16 GB solid-state hard drive; and a free two-year subscription for 100 GB extra of Google Drive storage.

The C720 drops one of the C710's three USB 2.0 ports. While it ships with only two USB ports, one of them is a USB 3.0 port that last year's model didn't have.
Acer says that variants of the C720 will be available in the coming weeks. That could mean a bigger hard drives or a 4G mobile data radio, both of which would help Acer differentiate the C720 at a time when the growing Chromebook market is getting crowded. However, Acer has yet to offer a 3G or 4G radio in any of its North American Chromebooks.