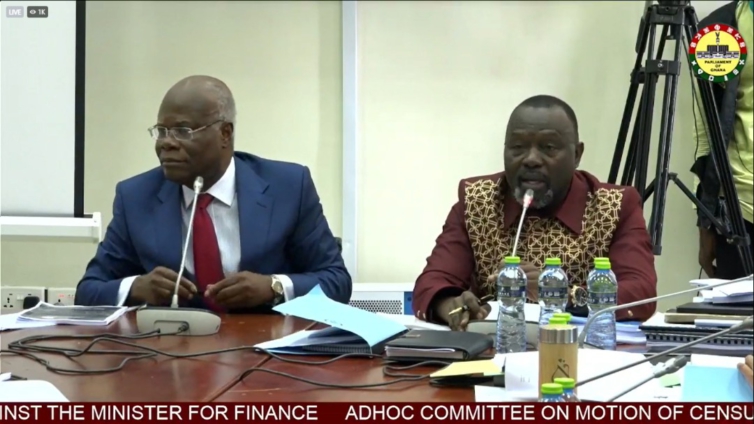 The 8-member Ad-hoc Committee set up by Parliament to probe the Minority censure motion against the Finance Minister has laid its report before the House.

It comes a week after the committee concluded its work.

The Committee was given a seven-day mandate to present their finding for it to be debated in the House.

Speaking to JoyNews after the presentation, Member of the Committee Samuel Okudzeto Ablakwa expressed disappointment about the slow pace in dealing with the committee’s report and taking a final decision on the Finance Minister.

“I was unhappy about the laissez-faire attitude …the heart of this issue is that Article 82 has been triggered. It says that during the debate, the Minister facing a vote of censure must be heard and that has been done. I thought that in the Business Statement for next week it would have been programmed specifically and clearly so that we will have a day set aside for the debate,” he said.

According to him, the more time given to the Finance Minister to stay in office brings about further hardships.

“We have to get on with the assignment, let us complete it, let us table this to have the vote for Ghanaians to know where their MPs stand,” he said.

The North Tongu MP also extended an invitation to NPP MPs to join them remove the Finance Minister, warning that MPs would have abdicated their responsibility if Mr Ofori-Atta remains in office.

“I hope that we meet the two-thirds threshold if only our colleagues at the other side will just show some principles and consistency…,” he said.

“To the extent that he doesn’t want to resign and the President does not want to dismiss him, the onus is on us MPs and I do hope that my colleagues will value public opinion, will respect the will of the people and will remember that it is the Ghanaian people who elected us and brought us here, and we must at all times reflect what they expect,” Mr Ablakwa added.

DISCLAIMER: The Views, Comments, Opinions, Contributions and Statements made by Readers and Contributors on this platform do not necessarily represent the views or policy of Multimedia Group Limited.
Tags:
Censure motion
Ken Ofori-Atta
Parliament