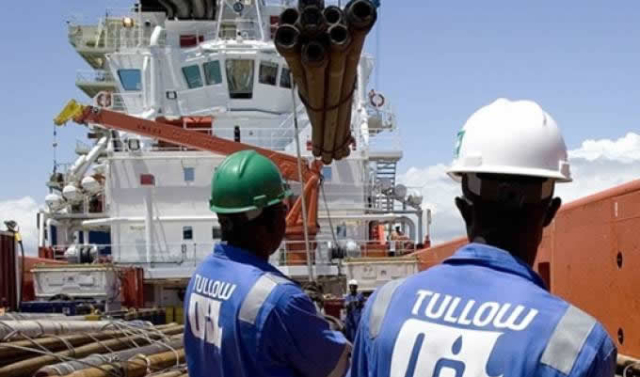 The former Chief Executive of Ghana National Petroleum Corporation (GNPC), Alex Mould is calling on government to as a matter of urgency engage Tullow Ghana and its partners in order to protect the jobs of Ghanaians in the upstream petroleum sector.

According to him, government’s inability to lift gas from Jubilee field as a result of delays in completing the reverse flow of the WAPCo pipeline from Aboadze to Tema, topside challenges on FPSO Kwame Nkrumah, reservoir issues at Tweneboa, Enyenra, Ntomme (TEN) were to be blamed for TULLOWS inability to meet its production targets.

In his latest epistle, the Oil and Gas expert suggested Tullow needed to transform from an exploration to a mature producing company; “this will mean major restructuring and massive layoffs.”

Mr. Mould urged Tullow to eliminate those unnecessary highly paid cushy jobs at their Chiswick Head Office, “whose time writing charges are suspected to be inflating the cost of oil production of their Ghana operations.”

TULLOW OIL CRISIS: ALL IS NOT GLOOMY FOR GHANA

This week, TULLOW Oil (aka TULLOW) shocked the oil world when both its CEO and Exploration Director, who were also board executives, “resigned” with immediate effect.  Tullow also suspended dividend payments.

When TULLOW Oil Plc issued its initial public offering (IPO) less than 10 years ago, the value of its shares went north of $20. Last Monday it fell below $1.00, but has since bounced back up to $1.50.

Investment Analysts say that a culture change and debt refinancing in 2022 will be required to support the equity value going forward.

The 75% drop in its price by 1pm on Monday was attributed to the following reasons:
âƒ    A reduction in production estimates from 100k to 70-80k bbl/day (Tullow’s share of the total production mainly in Ghana), and then 70k bbl/day from 2021-24;
âƒ    A 25-30% downward revision of one of its flagship oil fields in Ghana, TEN;
âƒ    Miscommunication on oil quality issues in its highly publicised Guyana discovery;
âƒ    Lower than expected investments in Ghana which is required to sustain production at levels needed to ensure the free cash flow promised to investors.

So, what are the real challenges at both Jubilee and TEN fields?

1. Jubilee field:
–  Tullow has revised its production targets downward several times this year and the resulting drop in net free cash flow is hurting the company’s bottom line.
– Good News for Jubilee is that there was minimal change to Jubilee field reserves.

The reduction in production was mainly due to topside challenges on FPSO and reduced facility uptime, an increasing water cut and the fact that the field is no longer a greenfield but a brownfield.

It is imperative that Tullow adapts its Operator-philosophy and gears up for the challenges in managing brownfield assets which requires maintenance of aging assets and tested life-of-field management.

TULLOW also blamed the failure to meet its production targets on Ghana government’s inability, and in particular Ghana National Gas Company, to offtake the gas from Jubilee field; which according to Tullow was due to delays by government in completing the reverse flow of the WAPCO pipeline from Aboadzi to Tema.

– Tullow also has been unable to hit its nameplate production target of 80k bbl/day with production falling below 60kbbl/day. The resulting drop in free cash flow adds to the challenges at TEN.

This is due to Enyenra field challenges and in particular its inability to successfully complete the EN14 and EN16 wells, and also, a faster than expected decline of Enyenra field.

Tullow’s biggest challenge is that its debt will need refinancing in mid-2022 and additional new inflows will be required to fix the ailing balance sheet.

The challenge Tullow faces is a possible no-confidence vote from its partners, especially Kosmos, who have always been very critical of Tullow’s Operator ability ever since the FPSO Turret debacle early 2016.  It appears these issues and challenges may not have been fully discussed and agreed with its partners especially Kosmos, who should have released a statement as required by the US Securities and Exchange Commission, had they been aware.

TULLOW is now a sitting duck – a takeover target looking for a new CEO.

Speculation is rife that Tullow is in search of a new owner; the most probable saviour being Total – the French giant, whose operations overlap all of Tullow’s assets, and who, unlike TULLOW, has a strong reputation as an efficient offshore operator.  Total also has links to cash rich Qatar Petroleum.

All is not gloomy; Tullow still has one of the world’s best assets in Jubilee – a low cost producer and now considered a brown field and a cash cow.  However, TULLOW has to transform from an exploration to a mature producing company; this will mean major restructuring and massive layoffs.

Let’s hope Ghana government will stand firm to ensure that the right “fat” is cut – mainly expensive unnecessary head office staff and expatriates, NOT the highly qualified lower paid Ghanaians.  Eliminate those unnecessary highly paid cushy jobs at their CHISWICK Head Office, whose time writing charges are suspected to be inflating the cost of oil production of their Ghana operations.

In the meantime, the Ghana government needs to negotiate with the contractor group partners to ensure that there are minimal Ghanaian casualties at TULLOW Ghana Limited — a Company registered in Jersey, UK and indirectly owned by TULLOW Oil plc, through its Dutch subsidiary.

It is imperative that government of Ghana has emergency meetings with the top echelon of Tullow to discuss:
–   The quantum of investment needed in Greater Jubilee to sustain production average of 100+ kbbl/d levels;
–    Tullow’s ability to meet cash calls for further development drilling giving their balance sheet challenges;
–   Tullow Oil Plc giving the Ghana business – Tullow Ghana Limited – the autonomy needed to properly manage the Jubilee and TEN assets as against driving these businesses to provide, at any cost, the needed cash flows to sustain TULLOW Oil Plc’s ambitions in Guyana and in East Africa.

It is believed that Tullow’s unsuccessful forays into East Africa is the main reason for the strain on Tullow Oil Plc’s fragile balance sheet. Tullow’s next hope was Guyana, but miscommunication of the type of oil and the difficulties associated with producing it have caused investors to lose hope on this once shining beacon in the E&P world.