Adebayor allowed to return to Togo for personal reasons 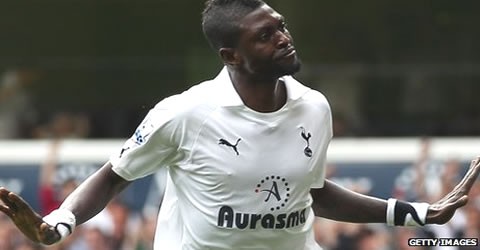 Emmanuel Adebayor has been allowed to return to Togo by Tottenham for personal reasons.

The striker has been given a leave of absence by the Premier League club who announced the news on Twitter this morning.

Tottenham said: "We can confirm that Emmanuel Adebayor has been given permission to return home for personal reasons.

"This is a private matter and so we will not be providing any further comment."

Adebayor has scored two goals in 10 appearances his term but hasn't featured for Mauricio Pochettino's side since November 9.

Spurs lost to Stoke that day and Adebayor was restricted to a 25-minuted cameo.

After the game, Adebayor criticised the club's home support and has since been involved in a bizarre series of claims relating to his mother and juju witchcraft back in his native Togo.