Adele on Emmy win: Trust me to officially have an EGO 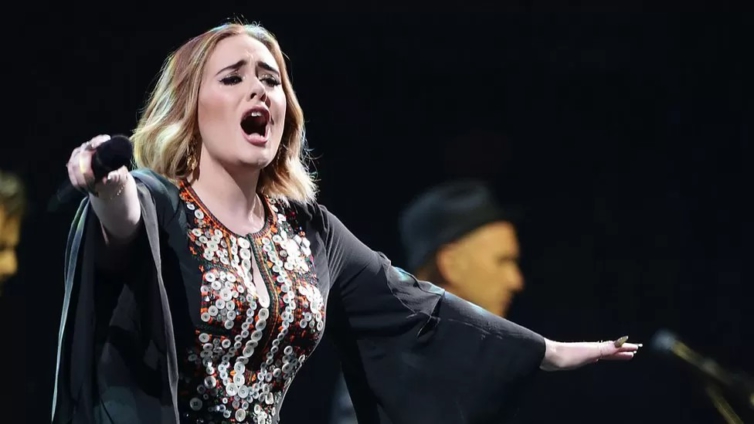 Pop star Adele is one step closer to EGOT status, after winning an Emmy for her TV concert special, Adele: One Night Only.

The term refers to stars who’ve won the grand slam of US awards – an Emmy, Grammy, Oscar and Tony, covering TV, music, film and theatre respectively.

Adele’s Emmy adds to her 15 Grammys and Oscar for the Bond theme Skyfall.

“I’m pleased as punch!” said the star on receiving her latest prize. “Trust me to officially have an EGO.”

The 34-year-old posed with her latest statue in a pair of Instagram photos, adding a laughing emoji to her message.

One Night Only won the Emmy for best outstanding variety special (pre-recorded) at Sunday night’s Creative Emmy Awards – which precedes the main Emmys ceremony next week.

It won four other prizes at the Emmys, for direction, sound mixing, lighting design and camerawork.

“Big up to everyone involved,” said Adele. “@griffithobservatory thank you for letting me sing up on your mountain and big love to all the other nominees.”

Those other contenders were Dave Chappelle’s controversial comedy special The Closer, the much-hyped Harry Potter 20th Anniversary: Return to Hogwarts, Norm Macdonald’s Nothing Special and One Last Time: An Evening With Tony Bennett & Lady Gaga.

Adele’s show was one of five shows to win five prizes at the weekend ceremony, alongside Stranger Things, Euphoria, The White Lotus and Peter Jackson’s four-part Beatles documentary Get Back.

Eminem also became an EGO, thanks to his participation in this year’s Super Bowl Halftime Show, which picked up three awards, including one for outstanding live variety special.

RuPaul won a seventh consecutive Emmy for hosting his reality juggernaut RuPaul’s Drag Race. That brings his total of trophies to 12 – the most for any black performer in Emmy history.

Actor Nathan Lane won his first ever Emmy, after a record seven nominations without a win for guest roles in shows like Modern Family, Frasier and The Good Wife.

The Birdcage star picked up his trophy for playing Greek deli owner Teddy Dimas in the Disney/Hulu comedy series Only Murders In The Building. The show is also up for best comedy series at next week’s Primetime Emmy ceremony, while comedy legends Steve Martin and Martin Short are both nominated for best lead actor for their roles in the crime caper.

Stranger Things’ awards included recognition for music supervisor Nora Felder, who made Kate Bush’s Running Up That Hill as a recurring motif of the fourth series – inadvertently sending it to number one around the world.

“A lot of people are relating to the song,” she told reporters backstage. “I think children are having to go through lots of feelings of isolation. The song allows them to kind of express how they’re feeling.”

Squid Game’s Lee You-mi became the first Korean performer to win best guest actress in a drama series, for her heart-breaking portrayal of Ji-yeong (aka Player 240) in Netflix’s dystopian thriller.

“I’m so very happy,” she said, joking that her trophy felt “very heavy”.

“It almost feels like a sense of heavy responsibility that I haven’t practised,” she added, through a translator. “I want to be able to do more with it moving forward.”

The late Chadwick Boseman also won a posthumous award for reprising his Black Panther role of T’Challa on Disney’s animated series What If…?

The award was accepted by his widow, Simone Boseman.

Football comedy Ted Lasso and comedy-drama The White Lotus came in joint second with 20 nods each.

DISCLAIMER: The Views, Comments, Opinions, Contributions and Statements made by Readers and Contributors on this platform do not necessarily represent the views or policy of Multimedia Group Limited.
Tags:
Adele
Adele Emmys
EGOT
Emmy Awards
Emmy Awards 2022