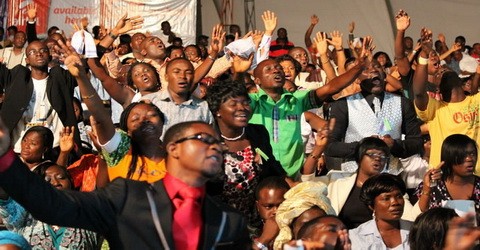 Adom FM Saturday night served Ghanaian Gospel Music lovers the biggest thrill of their lives with six hours of action-packed praise and worship at the third edition of Adom Praiz at the Dome in Accra.

The event organizers, Adom 106.3FM, had promised the nation “something special” after the highly successful Adom Praiz 2010. The 2011 edition was a class act.

“Fantastic” was the verdict of a septuagenarian who defied her age and sang, clapped and danced throughout. Another patron, Michael Sowah, tweeted “I am so blessed, Adom Praiz, the world’s most important live gospel concert. You can’t get (it) anywhere but only in Ghana, Adom fm”.

American gospel icon, Ron Kenoly who performed the headline act, kept the auditorium alive with his songs of worship, praise, jokes and, above all, powerful prayers.

The 66-year-old “We Offer Praises” singer led an unprecedented a list of crème de la crème of Ghana’s gospel music to the annual biggest gospel music event at the Dome of the Accra International Conference Centre.

The programme, anchored by Rev. Asuo Mensah of Adom FM, paraded a galaxy of big names in Ghanaian Gospel music. Back-to-back, artistes from the older generation, Mary Ghansah, Daughters of Glorious Jesus, Stella Seal, Tagoe Sisters, Yaw Sarpong rolled back the years and kept the 4,000 pairs of legs dancing from one act to the other while the new generation of Soul Winners, Cecilia Marfo, Nii Okai and Philipa Baafi also took turns to wow the audience.

Nii Okai kicked the show off on a very worshipful note with songs like Guide Me, Moko Be, Gye W’ayeyi preparing the audience for a night of praises and adoration.

Yaw Sarpong raised the momentum and kept the fans on their feet with a great performance of songs like Se Onyame Hyira Wo, W’aye Awie, Halleluyah. His performance was all the more moving with his interspersion of his testimonies of what God had done in his life throughout his career.

Cindy Thompson set the auditorium alight with songs like Dromo, Anwanwa Do, Awurade Bohye and the ever popular Awurade Kasa which she sang passionately as she explained the meaning it had for her.

Talented Rev Mary Ghansah did not miss the opportunity to get the crowd deeper into worship with songs like Wo Ye Ohene, Baba by Sonnie Badu, Yede W’ayeyi Ma Wo, and Onipa Ben Po Ne Wo among others.

She had already told the audience she was there to worship God and true to her word, she did just that with the audience in one accord with her.

She also motivated the crowd with songs such as Onyame Nnae and Enka Akyiri to motivate and encourage them never to give up, no matter the circumstance since God will never fail them. She rounded up her ministration with a rendition of Benjamin Dube’s song, Double Double.

Daughters of Glorious Jesus electrified the crowd with old and new songs like Ende M’anya Anigye, Bebre, Trimude and a rendition of a popular church song, Lord I Lift Your Name on High.