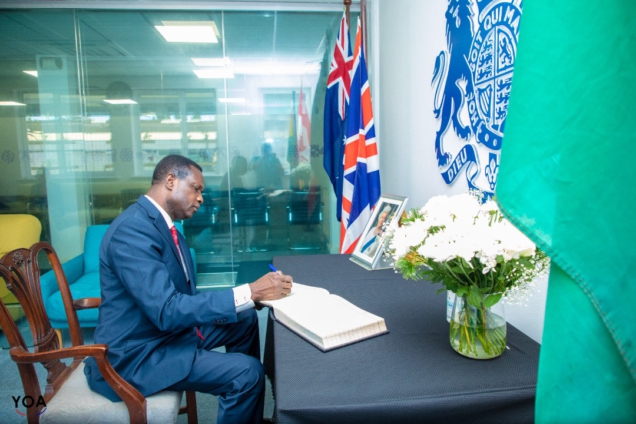 The Education Minister, Dr Yaw Osei Adutwum, on Wednesday afternoon, signed the book of condolence in memory of Queen Elizabeth II at the United Kingdom Embassy here in Accra.

The Minister who was accompanied by a delegation from the Education Ministry after the signing remarked that “Her life and service to humanity would forever be remembered by all”.

Again, he was happy for the smooth and quick takeover by King Charles III, to be at the helm of affairs for the leadership of the monarch.

Present at the signing ceremony was the British High Commissioner, Harriet Thompson, who was grateful to all Ghanaians and the people from the rest of the world for the show of love and support during such a time.

The late Queen who was originally called Elizabeth Alexandra Mary was born on 21st April 1926 and passed away on 8th September 2022.

She reigned for 70 years and is on record as the longest-serving British Monarch ever.
The Prince of Whales, Prince Charles who happened to be the Queen’s eldest son has been sworn in as the new Monarch with the Regnal Name, King Charles III.

Currently, various measures including security arrangements have been put in place for the smooth burial and funeral rites scheduled for next Monday.

The President, Nana Addo Dankwa Akufo-Addo, was the first person to sign the book of condolence after the demise of Queen Elizabeth.