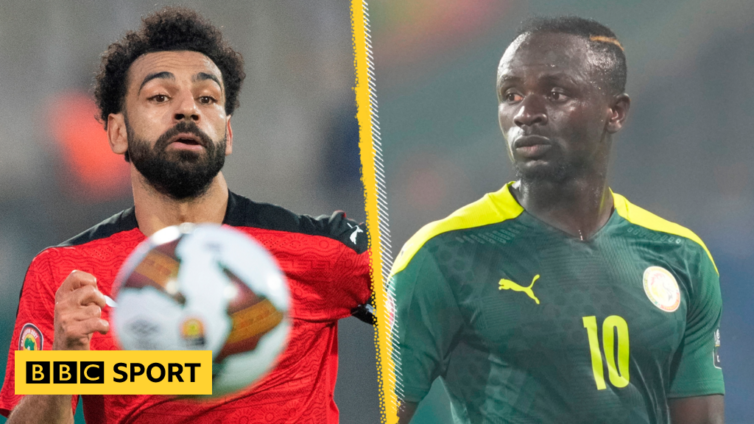 The Africa Cup of Nations semi-finals and Sunday’s final will be shown live in the UK on the BBC.

Burkina Faso faces Senegal on Wednesday (19:00 GMT), with Sadio Mane one goal away from equalling the Senegalese all-time goals record of 29.

His Liverpool team-mate Mohamed Salah should be in action on Thursday as Egypt play hosts Cameroon (also at 19:00 GMT).

The games are on BBC Three, BBC iPlayer and the BBC Sport website and app.

Senegal topped Group B with a win and two draws and have since beaten Cape Verde and Equatorial Guinea to reach the last four. They are favourites to reach the final.

Their attempts to win a first Afcon title will be spearheaded by Mane, who scored their only goal of the group stage and netted in the last 16 to move to 28 international goals, one behind Henri Camara.

Burkina Faso, captained by Aston Villa’s Bertrand Traore, have had a bumpier ride to the last four, finishing second in Group A before beating Gabon 7-6 on penalties and then shocking Tunisia 1-0 in the last eight.

They will be without suspended teenager Dango Ouattara, who scored the goal to beat Tunisia before being sent off.

Seven-time Afcon champions Egypt started this year’s tournament poorly, losing 1-0 to Nigeria, but hit back with two successive 1-0 wins of their own to finish second in Group D.

They needed penalties to beat Ivory Coast in the last 16 and extra time to finally see off Morocco in the quarter-finals.

No prizes for guessing who their star man is. Liverpool’s Salah has one goal to his name so far in these finals, and will be ably supported by fellow Premier League players Mohamed Elneny of Arsenal and Aston Villa’s Trezeguet, who scored their last-eight winner.

Hosts and five-time winners Cameroon topped Group A before narrowly beating 10-man Comoros in an eventful last-16 tie and then easing past Gambia.

They have the two top scorers in the competition in their ranks – Vincent Aboubakar (with six goals) and Karl Toko Ekambi (five).

DISCLAIMER: The Views, Comments, Opinions, Contributions and Statements made by Readers and Contributors on this platform do not necessarily represent the views or policy of Multimedia Group Limited.
Tags:
AFCON 2021
BBC
Final match
Semi-final match