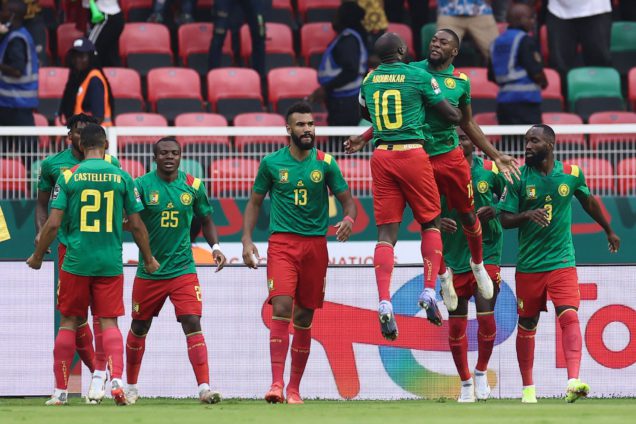 The second round of fixtures in the group stage of the ongoing 2021 Africa Cup of Nations got underway on Thursday, January 13, with two games in Group A.

Burkina Faso were in action against Cape Verde in the last game of the day but Cameroon recorded the highest victory in the country so far against Ethiopia earlier on.

The Indomitable Lions were too good on the day against the Walias as they thumped Ethiopia with a 4-1 scoreline at the Olembe Stadium, coming from behind for the second consecutive time in this tournament.

Ethiopia opened the scoring as early as the fourth minute, when Amanuel Gebremikael provided the assist for Dawa Hotessa to break the deadlock in the game.

Ethiopia came into the game at the back of a 1-0 loss to Cape Verde in their first game but their lead only lasted for just four minutes as Karl Toko Ekambi levelled the scored for the host nation.

Toko Ekambi should have made it 2-1 before the break but the Olympique Lyon forward’s header from a set-piece came off the outside of the post.

Cameroon got the better of the Ethiopians after the recess. Vincent Aboubakar scored two quick goals eight minutes into the second half before Toko Ekambi also completed his brace in the 67th minute as Cameroon look to have secured a place in the next round.

Later in the day, Hassane Bande, who was named in the starting line-up to replace Bertrand Traore scored the Stallions only goal against Cape Verde to give his side a lifeline ahead of the last round of matches.

Bande made the most of a brilliant cross from Issa Kabore in the first half to open the scoring before the half-time whistle.

Ethiopia are the only team in Group A without a point and face Burkina Faso in their last game, while Cameroon, who have six points from the opening two games play Cape Verde.