AFCON Last 16: Gambia advance to quarter-final with win over Guinea 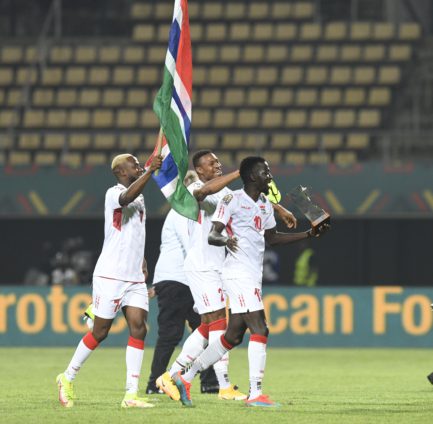 Gambia’s incredible run in the ongoing Africa Cup of Nations continued on Monday, January 24, as they beat Guinea to advance to the next stage of the competition.

Musa Barrow scored the only goal of the game after 71 minutes as the Scorpions recorded a famous victory over the Syli Nationals.

Guinea defender Ibrahima Conte had an equaliser ruled out for offside before Gambia were reduced to 10-men after Yusupha Njie was sent off following a second yellow card received.

Baboucarr Gaye made a vital save to deny Jose Kante from scoring a late to draw his country levelled.

Gambia are playing in the AFCON for the very first time in their history and will now play in the quarter-final of the 33rd edition.

In the other game of the day, Karl Toko Ekambi and Vincent Aboubakar were both on target as Cameroon recorded a 2-1 win over Comoros at the Olembe Stadium.

Comoros played with an outfield player, Chaker Alhadhur, in post following two of their goalkeepers suffering from Covid-19 while the other had suffered an injury.

Amir Abdou’s side had to play the majority of the game with a man down as Nadjim Abdou was shown a red card in the 7th minute of the game.

Toko Ekambi opened the scoring for the Indomitable Lions after 29 minutes, with Aboubakar providing the assist to break the deadlock.

Toni Conceicai’s side extended the lead after the recess through Aboubakar, who became the first player in the 21st century to score more than five goals in a single AFCON tournament.

Yousssouf M’Changama gave Comoros hope with 10 minutes to go until the end of the game but they could do little to cause an upset as the game finished 2-1.

Cameroon will now play Gambia in the next stage of the competition.