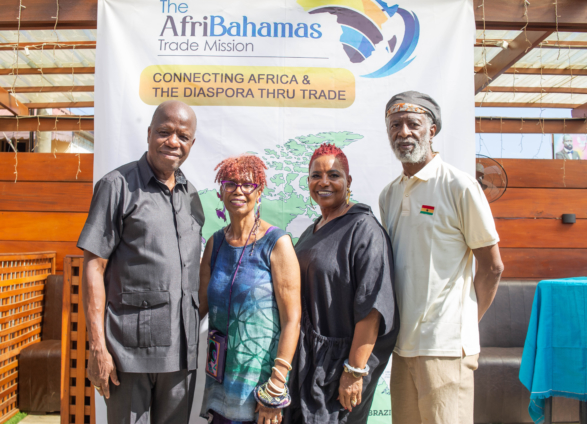 The government of Bahamas has taken a giant step towards establishing business connections between the Caribbean nation and Ghana, where most of its citizens are believed to have been taken from as slaves four centuries ago.

An Africa- Carribbean Trade Mission has therefore been established in Accra to facilitate the connection between Ghana and the country which is known largely for its huge tourism industry.

At a short ceremony to open the centre in the Accra suburb of Ashaley Botwe, High Commissioner Designate of the Commonwealth of Bahamas to Ghana, Andrew Wilson said this marked the dawn of.

A new era for Africans taken into captivity through the slave trade to come back ‘home’, re-establish contacts with their motherland and bring their talents in support of the growth and development of Ghana and Africa.

“Ghana has opened its heart to the Diaspora. In fact, it has become the gateway to Africa. The Year of Return, has demonstrated the desire within the Diaspora to re-connect with Africa. I believe that through trade, enterprise, and investment we can build durable partnerships that can increase growth and revenue for Ghanaian businesses, while also providing economic opportunities for Africa’s vast global Diaspora,” he said.

The move to establish the trade center is in furtherance of Bahamas establishing its High Commission in Ghana with Mr Wilson having been appointed to lead it.

The center would be seeking to build strategic partnerships between Ghanaian and Bahamian businesses and entrepreneurs, developing the comparative advantages of each party to plug the needs of people in the diaspora and those in Ghana. it would be partnering with businesses in the area of textiles, fashion and tourism which is one of the biggest experts in the Caribbean nation.

The economy of Bahamas is almost entirely dependent on tourism and financial services to generate foreign exchange earnings. Tourism alone provides an estimated 60% of the gross domestic product (GDP) and employs about half the Bahamian workforce.

The people who populate the island country have a unique connection to Ghana and especially the Ahanta people of Ghana’s western region. Majority of the first slave ships that went from West Africa to the country were taken from the Ahanta area specifically from Princess Town- a small community in the Ahanta West Municipality. A good number of the slaves are believed to have been taken through the Fort Groß Friedrichsburg.

This group of slaves who went on to settle and populate Bahamas included Jan Kwa, an Ahanta chief who is known to have stood fiercely against the slave trade.

Jan Kwa is the person who started the Junkanoo festival- a celebration popular in the Caribbean and parts of America that are believed to have been mimicking the Kundum festival of the Ahanta and Nzema people.

“The opening of the Afri-Bahamas trade office. I today represent the descendent of one of the many stolen children of Africans who have returned home. Today, we take a small step of forging a lasting trade relationship between ghana and the wider african continent to the Bahamas and the wider African diaspora especially in the Caribbean region,” says Dr Michael Pateman, an Archaeologist who has been doing a lot of studies on historical relations between Ghana and the Caribbean.

The building of the center also follows visits to Ghana by the First Lady of Bahamas to re-establish diplomatic ties earlier this year.

Angelique F McKay works with the organisation of the Junkanoo festival around the world and has also recently been enstooled as Queen Mother Asafokyereba of Pokesu and the Ahanta people of Western Ghana.

She said the establishment of this center would open new doors for collaboration between people who are into the curation and development of the arts in Ghana and in the Caribbean for mutual benefit.

“The most important thing I have learnt is that all the ingredients for enterprise growth and development are already here. There is no need to re-invent a wheel. We just need to put that wheels on the wagon, the wagon on the road and move “forward, upward onward  together,” said High Commissioner-designate,  Wilson

DISCLAIMER: The Views, Comments, Opinions, Contributions and Statements made by Readers and Contributors on this platform do not necessarily represent the views or policy of Multimedia Group Limited.
Tags:
Accra
Africa-Caribbean Trade Mission