Kenya have qualified for the Africa Women Cup of Nations for the first time ever as Nigeria also advance to defend their title in Cameroon.

Equatorial Guinea, the only other team to win the women's continental title, will also be at the finals in November pending an investigation by the Confederation of African Football.

Having already qualified for the Rio Olympics in August both South Africa and Zimbabwe also reached the continental finals.

Ghana and Egypt join Cameroon as hosts in the eight-team finals.

The sides drew 1-1 in Nairobi on Tuesday, having drawn in Algiers 2-2 last week, and Kenya go through having scored twice away from home.

The result had seemed to be going Algeria's way when they took the lead on 21 minutes from Naima Bouheni – just after Kenya had a goal disallowed for offside.

But Kenya levelled in the second-leg tie in the 79th minute through Cherish Avilla to qualify for a continental finals for the first time.

Reigning champions Nigeria will defend their title in Cameroon after beating Senegal 2-0 in the second leg of their qualifier on Tuesday for a 3-1 win on aggregate.

The Super Falcons missed a chance to take the lead on the half-hour when Arsenal player Asisat Oshoala hit the bar with a penalty kick.

Senegal's misery was compounded when their coach was shown a red card on 50 minutes.

South Africa completed a 5-0 aggregate win over neighbours Botswana with a 3-0 victory on Tuesday.

Banyana Banyana scored their first goal in the 18th minute as Mamello Makhabane scored from the penalty spot.

Sanah Mollo and then a vicious shot from Nompumelelo Nyandeni's made it 3-0 before half-time.

There was also a convincing 4-0 second leg win for Ghana over visiting Tunisia to make it 6-1 overall.

Samira Suleman and Portia Boakye both scored before half-time.

The rout was completed with goals from Priscilla Adobea and a second from Suleman after the break.

On Monday, Egypt booked their place by beating Ivory Coast, going though on away goals.

Ivory Coast won the second leg of their tie 2-1 in Abidjan to make the score 2-2 on aggregate.

Rebecca Elloh and Tia Ines scored for the Ivorians , who played at the World Cup in Canada last year, before half-time to give the hosts an overall lead. 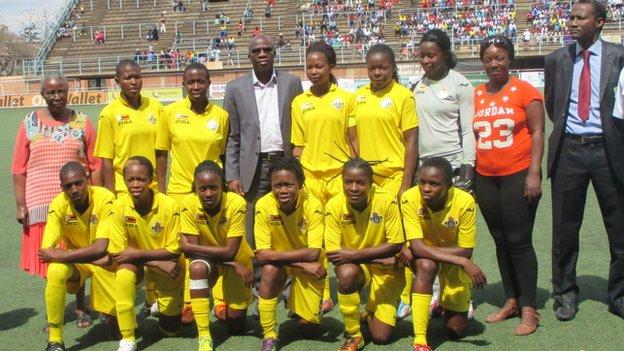 But a goal in the 86th minute from Nevein Gamal made the score 2-2 overall and Egypt progressed on the away goals rule.

Zimbabwe were the first team to qualify for the finals with a 4-2 overall win over Zambia on Sunday.

The second leg of the final round tie finished 3-2 to visiting Zimbabwe after Zambia had twice came from behind.

Kudakwashe Basopo, who scored the only goal of the first leg in Harare, gave Zimbabwe the perfect start with an away goal after just six minutes.

Zambia drew level midway through the first half through Noria Sosala but Samkelisiwe Zulu restored the lead for Zimbabwe 10 minutes before the break.

Misozi Zulu matched her namesake when she scored from the penalty sport for Zambia to make it 2-2 but Zimbabwe's Emmaculate Msipa scored a winner with just a minute left to play.

It means Zimbabwe's women have two major tournaments this year after they qualified for the Olympics in Rio.

It is the fourth time Zimbabwe have qualified for the continental finals for women, their best showing was fourth place in 2000.

Also on Sunday, Equatorial Guinea, who are the only nations apart from Nigeria to have won the African title, booked their place in the finals with a 2-1 win over Mali in Malabo.

The result took them through 3-2 on aggregate, however the Confederation of African Football say they are now investigating whether Equatorial Guinea used any ineligible players in the matches.

It follows their disqualification from the qualifiers for the women's football tournament at the Olympics in 2020 after Fifa found them guilty of using ineligible players in the qualifying ties for this year's Games in Rio – that they failed to reach.