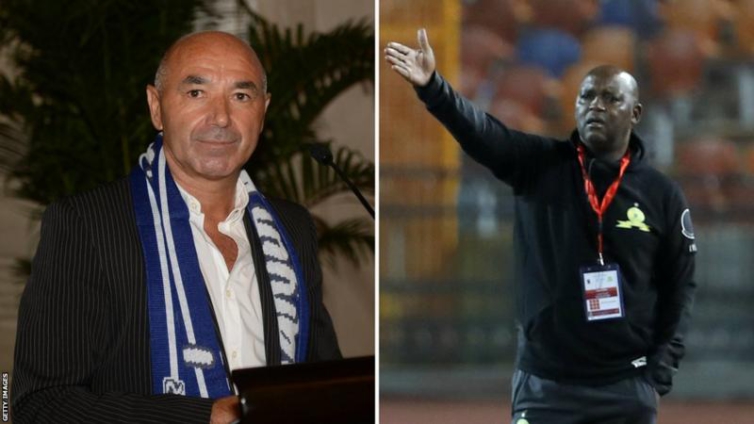 Friday’s African Champions League final in Cairo between Egyptian giants Al Ahly and Zamalek will be the first between rivals from the same country.

It will also be the first to be decided by one match rather than over two legs since the first final in 1965.

The match will be played in an empty stadium under the slogan “no to fanaticism”.

It once again brings together two clubs whose clashes have long dominated local and continental competitions.

The decision not to permit spectators at the 74,000-capacity Cairo International Stadium came in a joint statement by the Confederation of African Football (CAF) and the Egyptian Football Federation (EFA).

Referring to the coronavirus pandemic, they said “their top priority was to ensure the safety of Egyptian and African football families”.

Besides health concerns, the historic rivalry between Ahly and Zamalek raised fears of clashes between supporters.

Instead fans are set to be able to watch the match on television in clubs or youth centres, but not in cafes and public places.

“Ahly and Zamalek are like brothers and, unfortunately, the fanaticism is only among fans,” said retired Zamalek and Egypt star Hazem Emam.

Mosimane knows what it takes to beat Zamalek in a final after he guided his former club, Mamelodi Sundowns of South Africa, to a 3-1 aggregate victory in 2016.

“Mosimane has freed the players from restrictions imposed by former coaches, which tips the scales in his players’ favour against Zamalek’s players and their individual skills, especially (Achraf) Bencharki and Ferjani Sassi,” said Ahly’s Walid Salaheldin.

The South African is aiming to be just the third coach to win the title with two different clubs.

Egypt’s Mahmoud El Gohary won it with both Ahly (1982) and Zamalek (1993) while Argentine Oscar Fullone lifted the trophy with Ivory Coast’s Asec Mimosas in 1998 and just a year later with Morocco’s Raja Casablanca.

Pacheco, who returned to Zamalek six years after first coaching the White Knights, said he trusted his players, their strong personalities and ability “to please the fans”.

The Cairo clubs faced off in the Champions League on eight occasions with Ahly winning five matches and the other three drawn.

DISCLAIMER: The Views, Comments, Opinions, Contributions and Statements made by Readers and Contributors on this platform do not necessarily represent the views or policy of Multimedia Group Limited.
Tags:
African Champions League
Al Ahly
zamalek