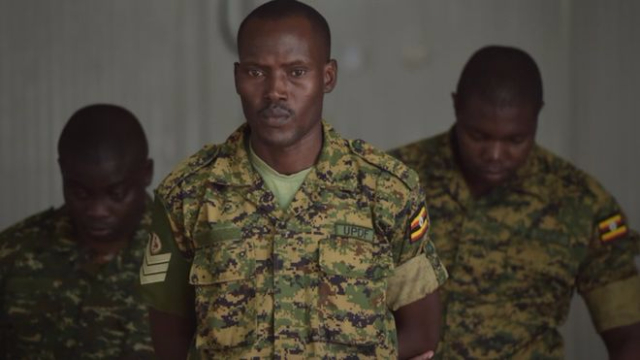 Nine Ugandan soldiers serving as peacekeepers in Somalia have been jailed for running a fuel racket.

The African Union (AU) said they had been sentenced to between one year and three years by a Ugandan military court, which sat in Somalia.

The officers, including two majors, were arrested in a sting operation in June.

The AU mission is fighting alongside Somali government forces against al-Shabab Islamist militants.

It was the first time a military court connected to the AU mission (Amisom) had sat in Somalia since the troops were deployed nine years ago.

Correspondents say it was decided to do so as an attempt to show Somalia's citizens that the Amisom force was being held to account. 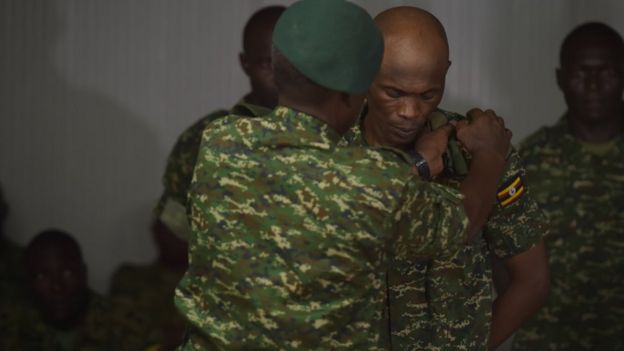 The nine were among 18 soldiers arraigned before the court for selling fuel belonging to Amisom to civilians in the capital, Mogadishu, an Amisom statement said.

"The prosecution has proved all the accusations of pursuing personal interest and endangering operational efficiency beyond reasonable doubt," it quoted Uganda's Brig Gen Dick Olum as saying.

Three of the soldiers had also been "dismissed with disgrace from the army", and would lose their benefits, it added.

Uganda is the highest troop contributor to the 22,000-strong Amisom force.

In June, the BBC also found that allowances paid to Amisom troops were being withheld because the European Union, which provides the funding, had accounting issues over a previous payment.

The deployment allowance is much more than the often meagre salaries the soldiers receive from their governments.