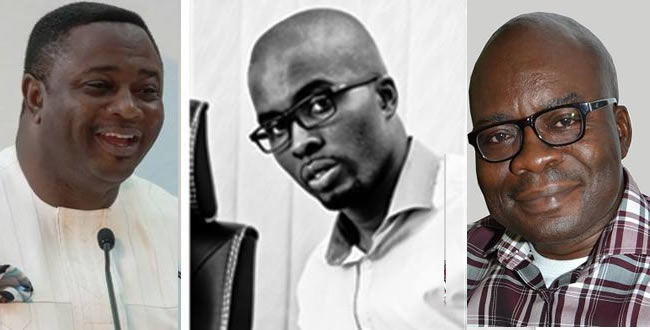 Joy News investigation has uncovered alleged payment of kickbacks from E-Volution International to Elvis Afriyie-Ankrah, the Ghana National Petroleum Corporation (GNPC) and the operations committee of the Brazil 2014.

E-Volution International, an events and marketing agency, was awarded a GH¢ 1 million contract to organise four public viewing centres in Accra, Kumasi and Takoradi during the 2014 Brazil World Cup.

Apart from the Accra Mall, the other three public viewing centres showed only the three group matches Ghana played in the tournament.

Manasseh Azure Awuni who has been investigating this deal reports that three separate internal payment vouchers in the possession of Joy News indicate E-Volution International’s approval for payment of money to former Youth and Sports Minister, Elvis Afriyie-Ankrah, the GNPC and the operations committee of the Brazil 2014 World Cup.

All the three payment vouchers, dated June 11, 2014, are signed and approved by the C.E.O of E-volution International, Mr Fred Darko. Mr Fred Darko was also the project coordinator for the 2014 World Cup.

According to one of the vouchers, an amount of GH¢100,000 was to be paid to Elvis Afriyie-Ankrah as “production cost (Brazil -2014)”. Below the signatures on the payment voucher is an instruction to the Company’s accountant, Alfred: “Pls deal as PR to Elvis A. Ankrah. FD.”
Another payment voucher of GH¢100,000 with the same description was to be paid to the World Cup Committee. Below the signatures of approval is an instruction to Alfred:

Joy News' investigations further revealed that the GNPC cheque of GH¢1million was paid into E-Volution International account on June 9, 2014.
It was paid with a National Investment Bank (NIB) cheque number: 076597. The payment was made into E-volution International Account number 0001124057015 with the Airpot Branch of UT Bank.

Joy News sources say the GNPC awarded the contract to E-Volution International without subjecting it to competitive bidding.

The Chairman of the Brazil 2014 Operations Committee, Mr Joel Nettey, told Manasseh Azure Awuni last Friday that the committee found it difficult to find sponsorship for public viewing centres and was about to abandon the idea when the GNPC stepped in with the sponsorship package.

He said though event organizers such as the Charter House Productions expressed interest in organizing the public viewing centres, officials of GNPC said they would sponsor if only the contract was awarded to E-Volution International. The GNPC officials, Joel Nettey said, explained that E-Volution International was already doing business with GNPC.

“Whoever signed this document, or whoever, whether the person took it in my name or what, we need to investigate because nothing like that happened,” Mr Afriyie-Ankrah told Manasseh.

The Chairman of the World Cup Operations Committee, Joel Nettey, as well as some members of the committee, has told Joy News no such money came to the committee. A source at the GNPC who was the supposed recipient of the GH¢80,000 has also denied receiving any such amount.

Lawyer, Company Secretary and Director for E-Volution International, Alex Abban, told Joy News the company did not make any payment to the three categories of persons. When he was asked about the payment vouchers, he would not deny or confirm that they were generated from the company.

“I would not be surprised that these are documents from E-Volution. I would not want to challenge that one,” he said, adding that it did not mean an admission that the documents were from the company.

When asked about Mr Fred Darko’s signature on the three internal payment vouchers, he said one of them appeared forged but refused to comment on the other two.

“I would not want to say clearly that all three signatures are forged ones,” he told Manasseh in an interview. When Manasseh insisted that Fred Darko, who was present during the interview, confirm or deny the authenticity of his signature, Lawyer Abban said Mr Darko would not speak on the matter for now.

According to Joy News Sources, the internal payment vouchers were generated for the purposes of auditing considering the huge sums of money involved. This was decided after the first alleged withdrawal of kickback was done. When asked why the description “production cost” or “PR” was written on them, a source said:

“It is just a term used to describe such transactions. You cannot write bribe or kickbacks on the payment voucher. If you put it that way and auditors ask, how will you explain that?”

“What is critical is: was the money paid, regardless of whether there was a signature on it or not?” he emphasized.
This is the question Manasseh Azure Awuni attempts to answer as he provides more revelations on this transaction on Joy Midday News today.