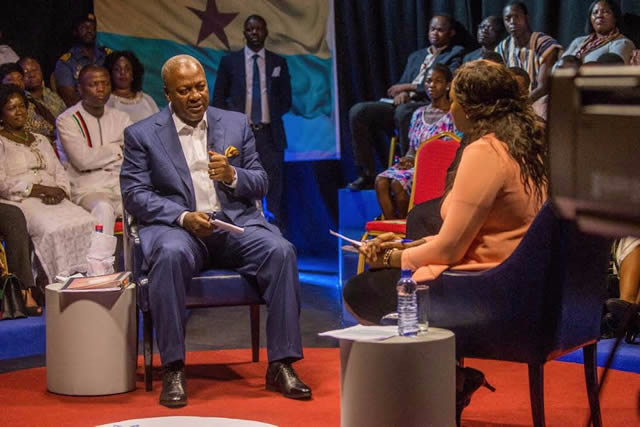 On a day the Attorney General has been criticised for failing to show enough commitment to collect a ¢51 million judgment debt illegally paid to business man Alfred Woyome, president John Mahama has lauded his principal legal advisor  describing her work as "phenomenal".

Speaking on the GBC Evening Encounter with presidential candidates, the president said his Attorney General has ceaselessly fought all cases of judgment debt ever since she was appointed Attorney General.

He said unlike some of her predecessors who sat down for claimants of judgment debts to obtain default judgments, Marrieta Appiah Oppong has been vociferous in dealing with all false claims and contracts.

The president said the sole commissioner's report on judgment debt was replete with cases of individuals attempting to claim debts they did not deserve but the  AG has been phenomenal in fighting off such claims.

The president's adoration of the Attorney General comes hours after the Supreme Court ruled that Martin Amidu, a former Attorney General must be the one to question business man Alfred Woyome, a man who has illegally been awarded a sum of 51 million cedis for no work done, at least according to the court.

The Attorney General Marrieta Appiah-Oppong who had early on indicated her preparedness to cross examine Alfred Woyome and demand the repayment of the 51 million cedis beat a surprise retreat only last week.

She filed a case at the Supreme Court to discontinue her   case against the business man, raising concerns about her commitment and government's preparedness to have the money retrieved.

The Supreme Court then admitted a motion filed by Martin Amidu to question Alfred Woyome.

But the president is unfazed by the Supreme Court's decision, Wednesday.

He told selected representatives of civil society groups, government delegation, journalists and the invited guests that the AG withdrew her application to orally question Woyome because an option of settlements had been discussed and the terms were being evaluated.

President John Mahama said if the terms are not favorable the AG would have gone back to the court to exhaust her option of oral examination.

He said his government's case with Woyome is a testimony of a government willing to boldly deal with corruption rather than the policy adopted by Kufuor administration which was to hide person in government accused of dabbling in corruption.