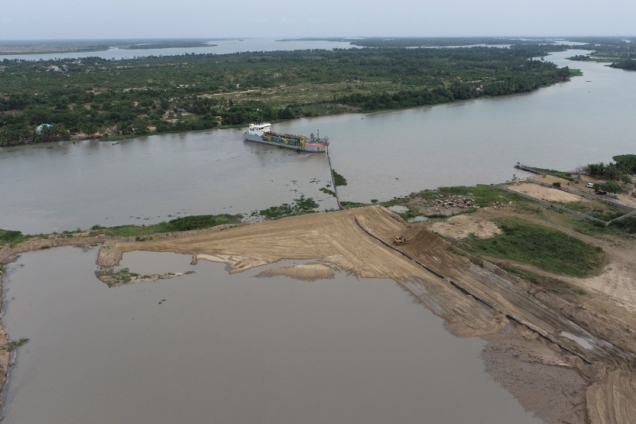 Residents of Agbeve community are pleased with the recent injunction restraining the dredging activities on the Volta River.

According to the residents, it was a welcoming news to have the court grant application of injunction on the vessel whose activities have polluted the river.

The residents who spoke with JoyNews noted that the situation became so serious that the only source of water was destroyed and fishing activities halted.

“We are very happy about the court injunction because we have really suffered and needed the injunction badly, so as to go back to our normal activities of fishing and also have a good drinking water “a resident said.

The residents also complained about some people coming for their urine samples without any prior notice.

The residents who said they chased the people from the village, asked that such a thing should never repeat itself again.

The residents appealed to government to make sure that the right thing is done and their river kept clean devoid of any activities that will cause adverse effects on it.

The residents also warned companies with intention of dredging and mining activities to stay off the community.

An injunction was granted about 2 weeks ago by a Sogakope High Court against the dredging activities by the Volta River Authority and the Lower Volta Dredging Contractors Limited on the Volta River.

This follows a suit filed by Zikpuitor Afatsawu Dzeble of Agbeve in the South Tongu District.

The application, which was filed on 12 December, 2022, was motion ex-parte for an order of interim injunction restraining the respondents and defendants from dredging which results in pollution of the river in Agbeve community and its adjoining communities.

The court, which was presided by Justice Doreen G. Boakye Agyei after listening to the application, granted the plea of the plaintiff. Thus, both the respondents and defendants have been restrained from carrying out dredging activities in the river.

DISCLAIMER: The Views, Comments, Opinions, Contributions and Statements made by Readers and Contributors on this platform do not necessarily represent the views or policy of Multimedia Group Limited.
Tags:
Agbeve Community
Volta River