Agenda 111: The vision is to make Ghana centre of excellence in healthcare by 2030 – Akufo-Addo 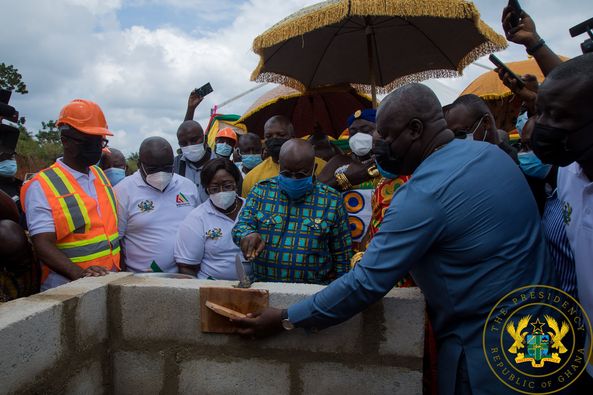 President Akufo-Addo at the launch of Agenda 111

President Akufo-Addo has envisioned that Agenda 111 will play a critical role in making Ghana the centre of excellence for medical care in West Africa by 2030.

Breaking grounds for the construction of the hospitals at Trede, in the Ashanti Region on Tuesday, the President noted that the project is expected to also increase the country’s Gross Domestic Product (GDP) by $2 billion and create direct and indirect jobs in the sector.

“My vision is to help make Ghana the centre of excellence for medical care in West Africa by 2030. Leveraging on Ghana’s favourable status in the region as the most peaceful country in West Africa, the beacon of democracy of the continent and land of opportunities.

“This, we will achieve in investing more in the development of our healthcare infrastructure,” he said.

Agenda 111 is an ambitious initiative that was first announced by President Akufo-Addo in April, 2020. The project involves the construction of District Hospitals, regional hospitals, and two new psychiatric hospitals.

President Akufo-Addo stated that the country’s health sector will experience a complete overhaul to achieve that objective.

He indicated that various regional health facilities must be upgraded and with specialization which can compete at the world-class level.

“India and South Africa have shown the way in this regard. The relevance of this is reinforced by the fact that, West Africa, by 2030 will have a population of half a billion people, the goal is for us to position Ghana as an attractive medical destination with excellent medical facilities for our neighbours to patronise,” he stated.

Government has secured 88 different parcels of land for the Agenda 111 project to commence.

According to the Information Minister, Kojo Oppong Nkrumah each hospital will cost $17 million, thus, “an amount of $100 million has been allocated for the project through the Ghana Infrastructure Investment Fund.”

On his part, the Health Minister, Kwaku Agyeman-Manu said government is committed to completing the projects as scheduled.

“It is obvious that government’s commitment to achieving the SDG’s universal health coverage cannot be downplayed. Bringing primary healthcare services to the doorsteps of government and this, I promise will be delivered without fail,” he stressed.

DISCLAIMER: The Views, Comments, Opinions, Contributions and Statements made by Readers and Contributors on this platform do not necessarily represent the views or policy of Multimedia Group Limited.
Tags:
Agenda 111
Kwaku Agyeman-Manu
Minister of Health
President Akufo-Addo