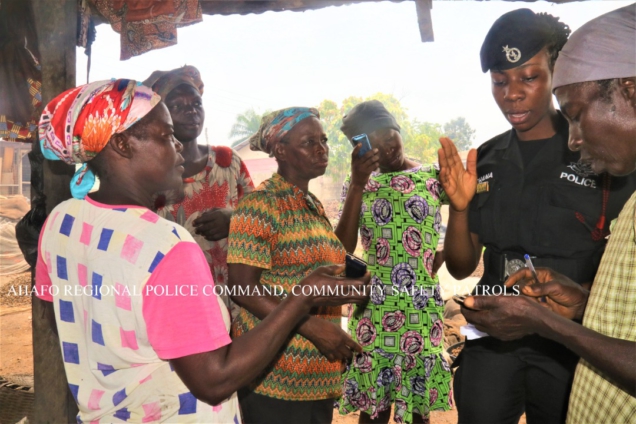 Ahafo Regional Police Command has launched a “Community Safety Patrols” program at Goaso, the capital of the Ahafo Region.

The launch on Monday, April 4, 2022 forms part of the police commands strategy for crime prevention in the communities.

The objectives of the community safety patrols include building confidence and trust between the police and the community.

According to the Ahafo police command, the safety patrols are also expected to facilitate the sharing of crime-related information between the police and the community as well as help reduce antisocial behaviors affecting people and the communities.

60 police personnel who form the first batch, drawn from the Regional, Divisional, and District commands in the region, have been detailed for the first phase of the patrols.

Deputy Regional Commander, DCOP David Eklu, at the briefing, advised the officers to demonstrate a high level of professionalism in all aspects of their work to achieve the intended target.

He reiterated the need for the officers to build trust and public confidence and reduce the fear of crime within the communities since they are usually the first point of call when it comes to crime and safety.

The personnel detailed for the patrols also distributed police emergency numbers to the community members and further encouraged them not to hesitate to call them to avert crimes or provide information that could lead to the arrest of perpetrators of crime.

Residents expressed their happiness with the formation of the community safety patrols and indicated their determination to support the team for their safety and peace in the communities.

DISCLAIMER: The Views, Comments, Opinions, Contributions and Statements made by Readers and Contributors on this platform do not necessarily represent the views or policy of Multimedia Group Limited.
Tags:
Ahafo Police Command
Community Safety Patrols